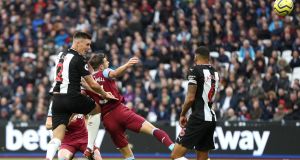 A header by Wolves striker Raul Jimenez cancelled out Pierre-Emerick Aubameyang’s first-half goal for Arsenal as the teams played out a 1-1 draw in their Premier League clash that smouldered for long periods, but never really caught fire.

Arsenal playmaker Mesut Ozil was in the team after his midweek League Cup performance but there was no place in the squad for captain Granit Xhaka, who was heavily criticised following his angry reaction to being substituted last week.

Arsenal looked set to break a run of poor league performances that has seen them take five points from the last four games when Aubameyang stabbed home Alexandre Lacazette’s pass in the 20th minute.

Despite dominating possession, Arsenal failed to score again and were hit by a sucker-punch in the 76th when Portuguese striker Jimenez headed home Joao Moutinho’s looping ball into the box for the equaliser.

Arsenal pressed forward looking for a late winner but the Wolves rearguard survived the loss of Irish international defender Matt Doherty to injury as they held firm to make it eight league games unbeaten.

With the home fans booing briefly at the final whistle, the result leaves Arsenal fifth on 17 points, with Wolves 11th on 13.

Newcastle improved their survival hopes with a 3-2 victory at out-of-form West Ham.

Jonjo Shelvey got a third six minutes into the second half and although Fabian Balbuena and Robert Snodgrass set up a nervy finish with goals inside the last 17 minutes, the Hammers are now without a win since September 22nd.

Sheffield United continued their impressive start to the season with a 3-0 defeat of Burnley.

The Blades had only scored three home goals prior to this contest but doubled that tally in the first 45 minutes against the Clarets.

John Lundstram opened the scoring from close-range in the 17th minute and doubled the advantage soon after, tapping home a ball from Enda Stevens.

John Fleck got a third goal for Chris Wilder’s team just before half-time.

Duffy slid in to tap home a Leandro Trossard free-kick, to score his second goal of an impressive start to the season for club and country.

1 Owen Doyle: Creeping professionalism of schools rugby a threat to the game
2 Champions Cup: Leinster will meet Saracens on Saturday evening
3 GAA officials and referees brace themselves as new rules kick in, and this time it's for real
4 Ole Gunnar Solskjær insists he is up to the challenge at United
5 Coco Gauff pulls off biggest shock yet by beating Naomi Osaka
Real news has value SUBSCRIBE