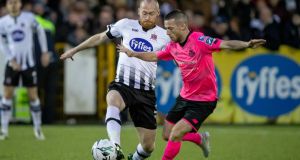 Vinny Perth says accepts that the buck stops with him with regard to the suspension of Chris Shields for the FAI Cup final on Sunday but the Dundalk manager has declined to get into the series of events that have left the double winners without their midfield anchor for such a big game.

Shields picked up his eighth booking of the season in the 1-0 loss to Cork City at Turner’s Cross a couple of weeks ago when he might well have sat out what was effectively a dead rubber for the champions. The upshot is that the 28-year-old will now have to watch from the sidelines as Perth’s side attempts to become the first since Derry City in 1989 to complete the treble by beating Shamrock Rovers.

Speaking at the Aviva stadium on Wednesday, Perth acknowledged that there were “loads of different things that could and should have happened. As head of the football club I take responsibility for it in the football part of it,” he said, but his insisted that he would wait until after Sunday’s game to get into the detail of quite how it was that things went wrong.

The club sought to appeal the card Shields was shown in the Cork City game, the midfielder’s second booking since Dundalk had wrapped up the title at home to Rovers towards the end of September, but were told that it would not be possible.

“It was a bit of a shock to the two of us after we found out,” said Perth who seemed to suggest that the club had been aware of the general issue but had somehow miscalculated with regard to Shields.

“Chris is obviously extremely disappointed. It’s unfortunate for him as a person. I think that we are known as a free-flowing football team with a lot of skilful players – Duffy, McEleney . . . Hoban’s goals. He [Shields] is slightly different than them but he is Mr Dundalk at the same time so it’s very disappointing. But we have accepted it and moved on.

“It’s probably the one position where we don’t have an exact replica but we have a strong squad and we’ve dealt with not having Chris at the start of the season (the player missed six games, four wins then the back to back defeats against St Patrick’s Athletic and Sligo Rovers).

“So we’ve coped before. The one thing we do is we train in a structured way where we work on a man sent off; we work on different scenarios. So we’re prepared for this.”

Perth’s opposite number Stephen Bradley expressed some sympathy for Shields and suggested that there should probably really be an amnesty when it comes to cup finals. But it was no great surprise that he was not making a case for any sort of exception to be made on this occasion.

“I’m disappointed for him,” he said, “because he’s a top player and players like him deserve to play in games like this, on occasions like this. It’s about showcasing the league, it’s the best two teams in the country and you want the best players on the pitch and he’s one of them. So I feel for him as an individual, I genuinely do, he’s earned the right to play here.

“But the rules are the rules. I remember a few years ago, there was a thing with Jason McGuinness, a commotion over a similar incident. It’s happened a few times over the years, I do think they should be wiped.”

In fact, the rules were previously changed so as to allow players incurring their first suspension of the season relating to an accumulation of yellow cards to play in a final but this is Shields’s second and so he does not benefit from the amnesty.