Man United brought back down to earth by Bournemouth 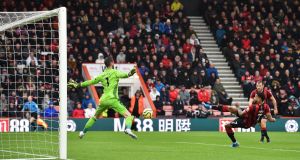 Manchester United’s mini revival came to a shuddering halt after a superb solo goal from Joshua King earned Bournemouth a 1-0 victory at the Vitality Stadium.

United had been seeking a fourth successive away win in the space of just 10 days to further ease growing pressure on manager Ole Gunnar Solskjaer.

But Cherries forward King, who began his senior career with United, condemned them to a fourth Premier League defeat of the campaign by neatly swivelling past Aaron Wan-Bissaka to volley home moments before the break.

The spotlight will once again fall on Solskjaer after he watched his team fail to build on quick-fire wins at Partizan Belgrade, Norwich and Chelsea in three different competitions.

United desperately pushed for a leveller during a dominant end to the game, with substitute Mason Greenwood striking the base of the right post before Bournemouth held on for a first win in five top-flight fixtures.

United were bidding to make it back-to-back league wins for the first time since Solskjaer was confirmed as their permanent manager in March.

The Norwegian reverted to the starting XI who last week won at Carrow Road after centre-back partners Harry Maguire and Victor Lindelof and forward Marcus Rashford shook off knocks sustained in the midweek Carabao Cup success at Stamford Bridge.

Bournemouth went into the game locked on 13 points with their visitors but having gone the whole of October without finding the net.

The early signs for Solskjaer were positive enough, with Andreas Pereira, Anthony Martial and Fred each having decent sights of goal, while Daniel James smashed inches wide from the edge of the box.

At the other, David De Gea was not required to get his gloves dirty until the 27th minute when he denied Ryan Fraser at the end of a swift Cherries move involving Callum Wilson and King.

United midfielder Fred and Bournemouth’s Jefferson Lerma were then booked at the end of a melee sparked by Martial going to ground in the area under a challenge from the Colombian.

A fairly uninspiring opening period played in torrential rain looked set to end goalless until King lit up the grey skies with a moment of brilliance in the final minute of the half.

United’s static defence simply stood and watched as King, who made two substitute appearances for the club under Sir Alex Ferguson, controlled Adam Smith’s centre, pirouetted past Wan-Bissaka and then emphatically dispatched the ball past De Gea from six yards.

The memorable strike ended a 359-minute goal drought for Eddie Howe’s side and condemned the away team to an 11th successive Premier League away game without a clean sheet.

For all of United’s early openings, it was not until the 57th minute that Bournemouth goalkeeper Aaron Ramsdale was properly tested when he pushed away Pereira’s powerful drive from distance.

Bournemouth had beaten United 2-1 on the first top-flight meeting between the clubs back in December 2015, with King also on target on that occasion.

The Norway forward came close to claiming a second when he was blocked by De Gea from close range after strike partner Wilson’s cross deflected off the head of Maguire, before Liverpool loanee Harry Wilson was denied a penalty in the aftermath having gone down under pressure from Scott McTominay.

United dominated the closing stages as they relentlessly pushed for an equaliser.

Substitute Greenwood volleyed against a post with eight minutes remaining, while a skidding low drive from McTominay was repelled by Ramsdale.

Cherries captain Steve Cook, on his 150th Premier League appearance, later produced a superb, last-ditch tackle to deny Rashford as the Cherries hung on for another famous win over the 20-time English champions.