Unai Emery calls for Granit Xhaka to issue an apology 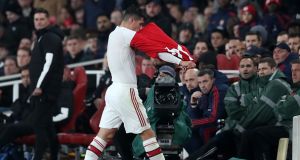 Unai Emery says Granit Xhaka is “devastated” after his traumatic departure from the Emirates Stadium pitch on Sunday, but the Arsenal captain’s situation remains up in the air as the club give him time to recover his frame of mind.

Xhaka was loudly jeered off during the 2-2 draw with Crystal Palace and swore at the crowd as he left the field, gesturing and removing his shirt in the process. It has cast his captaincy, and very future at Arsenal, into doubt. Emery said no decisions have been made and that, while he thinks Xhaka should apologise for his actions, the player is yet to offer any public contrition. No punishment has been handed down by the club either at this stage, even though Xhaka is widely expected to be fined.

“His commitment with the club is a great commitment every time. He wants to help. His behaviour was perfect in training, with the group and with the club. He knows he was wrong. He was wrong and he feels it inside very deeply. But that is normal as a human. You need, and every player needs, the supporters’ support.”

No apology has been forthcoming yet from Xhaka, against the advice of Emery and others in the Arsenal hierarchy. “Yes, I think when we make individual mistakes we need to make apologies for the circumstances,” he said. “I prefer to do that. We suggest to him to do it.”

Emery refused to put further pressure on Xhaka to make his peace with the support, however, and stressed that his recovery may not be an instant process. “What is the response we are seeing?” he said. “It’s that he is devastated and very down. First is to recover him, his feelings. We need our family, our friends, our supporters to support us, like us, love us. He is not feeling that with the supporters. But we are speaking with him first to be calm and be close with his family, and be close with us because we are your family too.”

Likewise, any decision about a fine will be made later. “I think we can [LATER]speak about the same,” Emery said. “We are in the first step after his mistake. Now is to recover him as a person.”

In line with that outlook, Emery said any decision about Xhaka’s continued captaincy will be taken “step by step” and that he did not wish to broach the topic.

Xhaka will not be involved in Wednesday’s Carabao Cup fourth round tie at Liverpool but that decision had been taken before Sunday, with rotation for that competition entirely normal. Mesut Özil will travel, though, ending a run of six absences from the matchday squad, and Emery said the playmaker could take the armband at Anfield – just as he did in his previous Arsenal appearance, the third-round win over Nottingham Forest.

“I’m not thinking exactly yet, but we are going to decide the first XI and [WHETHER]he’s in the first XI,” he said. “It depends on who else plays. He could be [CAPTAIN],yes.”