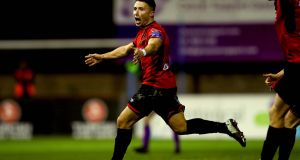 Chris Lyons struck in injury time to ensure Drogheda United will take a one goal lead into their promotion/relegation play-off second leg with Finn Harps on Friday night.

The striker finished clinically in the second minute of added time to produce a thrilling finale to an otherwise poor game.

Lyons had already tested Harps ‘keeper Mark McGinley twice in the early stages, first heading an Adam Wixted cross straight at him, before stinging his palms with a well-hit drive.

Harps’ best chance fell to Nathan Boyle when Tony McNamee presented him with an open goal, but he somehow blazed over and not even the offside flag could spare his blushes completely.

Ruairi Harkin brushed the post with a cross that seemed to deceive Drogheda goalkeeper Luka Gratzer but Harps produced little else, though manager Ollie Horgan was sent off for words said to the referee.

Harps appeared to have done enough to earn a draw, however. Particularly when substitute Stephen Meaney blazed over within moments of his introduction.

Lyons had other ideas though, and the tricky striker wriggled free in the box before coolly slotting the ball past McGinley.