Pochettino’s balancing act not likely to get any easier 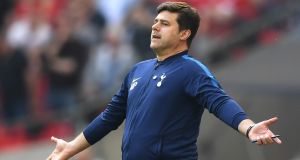 Tottenham Hotspur manager Mauricio Pochettino: We are the victims of our own success because we are ahead in our project. Photograph: Getty Images

Mauricio Pochettino has expressed the belief on several occasions. When Tottenham Hotspur move into their 61,559-seat stadium next season, the club will enter a new era of financial power. “It would be the time to say: ‘Now, we will win the title,’” the manager said in December.

The theory has been that the stadium’s increased revenues will help the club to attract and keep the A-list players.

The view has sat uncomfortably with the cost of construction. It seems a long time ago that £400 million (€455m) was the ballpark figure. Then, it became £750 million and £850 million, and now, nobody would be surprised if it reached a billion.

Tottenham have taken out £400 million in bank loans, which are repayable over a five-year period. This month they announced in their financial results for the year ended June 30th, 2017 that the “cumulative spend” on the project had increased from £115.3 million to £315.1 million.

The club’s profits were robust. They stood at £41.2 million after interest and tax. But whichever way you dress it up, there is a lot of money to find. It is no wonder that the chairman, Daniel Levy, “struggles to sleep at night”, according to Pochettino.

The penny – or great mountains of them – appears to have dropped with Pochettino and when he addressed the press, ahead of the game against Watford at Wembley tonight, there was a shift in his stance.

“The move to the new stadium is not suddenly going to change everything and millions of pounds will rain from the sky,” he said. “You have to manage and know exactly the expectations. It will be important to review and set the principles again; how it will be with the team once we move.”

Pochettino’s comments felt significant, just as the ones he made after the FA Cup semi-final defeat against Manchester United on the Saturday before last had done. In four post-match interviews he used the same phrase. The club needed more time to achieve success, he said, and it would be “with me or another” manager.

Pochettino was asked for clarification and he explained that Tottenham’s project was fixed so strongly for the long term it was inevitable that another manager would one day take over the responsibility.

Pochettino’s contract runs for a further three years. The project is designed for many more.

It remains difficult to escape the impression that Pochettino is approaching a crossroads. He has urged Levy on more than one occasion to move quickly in this summer’s transfer market while he ignored a question about whether he would lead the club into the new stadium and, instead, answered one of his own – the classic politician’s trick.

“If I stay here for three more years, the project will not change,” Pochettino said. “We cannot change because the club cannot change. Whether it is me or another, that is the right project to keep pushing. We are the victims of our own success because we are ahead in our project. It’s not easy to accept being close [to a trophy] and being disappointed. The easy thing to do is give up and say we need to change everything. No. We need to keep going. You have to keep dreaming.”

The supporters’ fear is that Pochettino will be prised away. The good news for them is that Paris Saint Germain are likely to replace Unai Emery with Thomas Tuchel while Real Madrid will surely not dispense with Zinedine Zidane if, as expected, he takes them to a third successive Champions League final.

But Pochettino has seen the future at Tottenham with clarity. The new stadium will change little for him. His transfer dealings since his arrival in the summer of 2014 have shown a net spend on permanent fees of £40.25 million – a remarkably low figure – and he will continue to have to sell in order to buy; to keep the books balanced.

Meanwhile the Manchester clubs, in particular, will carry on splurging. At what point does that get to Pochettino – a manager whose stated ambition is to win the Premier League title?

Tottenham remain in a curiously hemmed-in position with regard to strengthening the squad. Last summer they sold Kyle Walker to Manchester City for an initial £50 million to fund purchases that would make the collective stronger and this time they are expected to do something similar. Toby Alderweireld is for sale while they would listen to offers for Danny Rose and, surprisingly, Mousa Dembélé.

It will be difficult to find too many players who would improve Pochettino’s best XI and be happy to sign for, say, £60,000 to £70,000 a week, which is the threshold for many of his starters.

One example is Wilfried Zaha, who earns more than £120,000 a week at Crystal Palace. A deal for the winger would be complicated on many levels, not least in terms of the impact it would have on existing squad harmony, which Pochettino has fostered expertly.

Will Levy raise the wage ceiling? Yes, although not to market rates. In other words, the club’s stars could get more elsewhere, if they could get out – which is a big if under Levy.

Are Tottenham stronger without Walker or, indeed, Alderweireld, who has been marginalised? One thing can be said for certain and it is that the club’s players have noted with interest how Walker has trebled his salary at City and won the title. Could they do one or both at Tottenham? For Pochettino, the balancing act does not get any easier. – Guardian