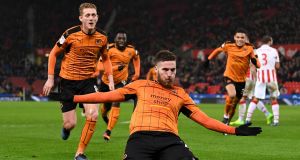 Matt Doherty freely admits that his big break was something of a fluke but the Dubliner would argue that he has not had too much handed to him on a plate in the seasons since.

Wolves were a Premier League outfit when he arrived for a trial after having apparently impressed in a preseason friendly against them for Bohemians eight years ago. He is understandably excited by the fact that they will soon return to the top flight.

Still a teenager at the time, he made his Premier League debut at Anfield in September 2011 when he came on for the second half but it was to be his sole league appearance in that relegation season and he was soon sent out on loan.

Now he is one of the few who has survived what has been a bumpy ride at times since and, as the club prepares to celebrate having won the Championship title on Saturday, he is relishing being centre stage now that the good times are really about to return.

“It’s just a really great time in our lives at the moment,” says the 26-year-old after a morning’s training made unexpectedly difficult last week by the sudden outbreak of warm weather.

“But I want to enjoy the moment as well as looking forward to what lies ahead. I don’t want to be thinking about the Premier League and so not enjoying what’s happening right now.

“I want to take everything in... the parade, lifting the trophy, getting to take my daughter [Nya-Rose] around the pitch [after Saturday’s game against Sheffield Wednesday]... I really want to enjoy all that but at the same time I have been thinking of some of the fixtures that we’ll get to play and I cannot wait for next season.”

One of the more mundane reasons is the somewhat less cluttered fixture list with Doherty suggesting that, even in your mid-20s, the twice weekly grind of the Championship can be quite a physical challenge.

“One a game a week is going to be nice,” he says, clearly savouring the prospect.

So too will be playing at places like Old Trafford and the Etihad and the Emirates, the latter the home of the club he supported as a kid playing for Home Farm and then Belvedere.

“I was there when we played Arsenal last time but only in the stand, I was 19th man unfortunately; I’ve been in the place but yet to get my feet on the actual grass.”

Being similarly overlooked now seems utterly unthinkable towards the end of a season in which he has played 43 of 44 league games and been one of the stand -out players in what has been comfortably the Championship’s best team. The club’s Chinese owners are, he says, hugely ambitious, though, and so there is always a risk.

Doherty certainly knows how brutal these things can be, having been around to witness two real clearouts.

The first involved the bigger names signed on Premier League wages, the last of whom didn’t leave until the club found itself in League One. The second, more recently, has been to allow current manager Nuno Espirito Santo, to assemble the squad required to secure promotion.

“There’s not as many egos now as there were back then,” he says.

“There were a lot of players back then on huge, huge money and it all got a bit toxic. You could tell by the way that things unfolded that it was a getting toxic; now it’s completely different . . . everyone is friendly towards each other, everybody gets on, the players are younger and feel that they can still improve together.

“You always think about it,” he says when asked whether he ever feared for his own place at the club, “but I wouldn’t say there was a fear. You think about it but at the end of the day I’m confident about my ability so you’re thinking: ‘I’m staying here; they ain’t getting rid of me because I’m good enough’.

“My thought process is that when they see me play: ‘We’ll have to keep him.’ That’s how I think. But you have to think like that. If you start to think negatively it will show in your performances, your attitude, your body language and yeah, I’ve managed to survive it all and it’s all worthwhile now.”

Critically, he says, his current deal came at a time when it was clear the resources were there to replace him if that was what they wanted to do.

“They obviously knew that they will be able to invest so to sign a new four-year deal obviously means that I’m part of their long-term plans. That’s really exciting for me.”

The squad looks cosmopolitan by Championship standards although his own journey to prominence within it has been resolutely old school. He played, he says, in the friendly where he was spotted because Bohemians, as he remembers it, had wound up having to play a cup replay the day before “and so the kids played the friendly”.

“I played for about 50 minutes and my dad said I didn’t even do all that well so it was a bit of a surprise that I even got asked to come away on trial. But when I did we had a game against Cheltenham away and I did alright; just alright . . .I wasn’t a world beater or anything . . .. but they must have seen something and decided to take a chance. I’m just grateful for that now.”

He went to Hibernian [where Pat Fenlon was the manager] then Bury on loan and, while neither went entirely smoothly, both spells away played important parts in the making of him as a person and a player, he reckons.

“You have to get out there,” he says. “There’s no point in playing underage football until you are 23. You’ve got to be able to play in games, cope in men’s football and that almost certainly means that you have to go to the lower leagues.

“You can be 19 or 20 and playing reserve team football, be able to say ‘I played at,’ say, ‘Manchester United,’ even though you have no actual first team appearances. But there are 19- and 20-year-olds at League Two level with 100 appearances under their belts. I know which one I’d rather be.

Except for a few very special talents, almost everyone has had a loan spell in a lower league at some point. You’ve got to do it, it’s how you grow up.

“I was at Hibs,” he continues, “and I didn’t enjoy it that much but I had to live on my own, fend for myself and I learned how to do that. Then, when I went to Bury, I just loved my loan spell there. I had Kevin Blackwell as manager and he had a huge influence on me as a player. I learned a lot from him.

“But it was difficult; we were in a relegation battle and they were hard times. People think that for footballers it’s all great but when you’re playing on a Tuesday night at Bury on a boggy pitch in front of 1,800 people and you are bottom of the league, it’s tough but you get through it and you really learn from it.”

A few weeks after returning to Molineux he was handed a chance in the first team by then manager Dean Saunders.

“That’s the other thing; I got the chance to play and I took it. A lot of people get the chance but don’t do that. You might only get that one chance and so you’ve got to grab it.”

He has done that and after having seen so many come and go, is delighted now to play under a manager who wants to use him as a wing back with loads of license to get forward and attack.

“That’s music to my ears,” says Doherty, who admits to having felt a little like he was “filling in” when played on the left or, on occasion, in midfield, although you sense he’d happily do either to add to the first senior cap he earned in Turkey in March.

Adding to that is just one of his ambitions and the club’s ambition, he insists, know almost no bounds as they look to launch themselves back on the Premier League. If there is a regret at all, it seems an unlikely one to an outsider. It is that major rivals West Brom are not, barring a miracle, going to be still up there next season.

“I reckon a lot of the fans would have wanted to be playing against them. I know I wanted to; that’s a huge derby game and I want to be involved in it but it looks like they’re going down and we’re obviously up.

“But it’s good. You always think it’s going to happen earlier but I guess you don’t go until you’re ready; maybe it wasn’t meant to happen until now when I’m ready, that’s how I’m going to look at it.

“I’m 26 now, I’m not getting any younger, the time goes so quick. How many years do you have? What? Eight? You’ve got to make the most of it, enjoy it while you can. You never know what’s around the corner.”

5 Marlay Park has designs on golf for all weathers