Crystal Palace hit Leicester for five to stride towards safety 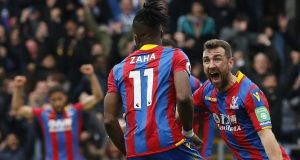 Crystal Palace moved to the brink of safety and increased the pressure building on Claude Puel with a convincing 5-0 victory over 10-man Leicester at Selhurst Park.

A team which looked destined for relegation after losing their opening seven Premier League fixtures without scoring a goal climbed to 11th and six points clear of the bottom three, where only Southampton are capable of catching them.

The in-form Wilfried Zaha again excelled and scored their opening goal, after which further finishes from James McArthur, Ruben Loftus-Cheek and Patrick van Aanholt, and Christian Benteke’s penalty, secured the three points that mean only a remarkable turnaround elsewhere would again put them at risk of the drop.

The hosts could have led from the ninth minute, when Leicester goalkeeper Ben Hamer unconvincingly punched the ball to James Tomkins while under pressure from McArthur and the defender headed towards goal before watching Kelechi Iheanacho clear off the line.

Iheanacho then created the visitors’ finest chance, playing Jamie Vardy through on goal only for the striker to be denied by another goal-line clearance, this time by Joel Ward, after his shot had beaten the diving Wayne Hennessey.

Palace responded by taking the lead in the 17th minute. From space on the left wing Loftus-Cheek found Yohan Cabaye, the midfielder played the ball across the penalty area to McArthur and he in turn sent a back-heel to Zaha at the back post that the forward powerfully struck into the top corner.

Hamer had been forced into another save by Zaha when, in the 38th minute, the hosts capitalised on their superiority by doubling their advantage.

In a reversal of roles, Zaha this time played McArthur in and he then turned and sent a routine finish low into the back of the net.

Puel’s Leicester performed like a team with little to play for, and at half-time he responded by replacing Hamza Choudhury and Iheanacho with Adrien Silva and Fousseni Diabate.

Instead of the reaction he would have demanded, his team were then reduced to 10 men when Marc Albrighton, as the last defender, pulled back Zaha and brought him down when he would have been one-on-one with Hamer.

If Palace’s victory was not by then secure, it was put beyond doubt when Loftus-Cheek calmly rounded Hamer and stroked in after being played in by Mamadou Sakho in the 81st minute.

Van Aanholt, with his weaker right foot, then curled into the bottom right corner in the 84th minute after collecting the rebound from substitute Jeffrey Schlupp’s saved shot.

Benteke had scored only twice this season and came off the bench to be brought down by Harry Maguire in stoppage time. Earlier in the season he had defied team orders, by taking and missing a late penalty instead of Luka Milivojevic, costing victory in a 2-2 draw with Bournemouth.

He was afterwards heavily criticised, but this time Milivojevic willingly stepped aside to allow him to end his goal drought and score by shooting straight as Hamer dived to his left.

1 Kevin McStay: Maybe a knockout All-Ireland Championship is the long-term solution?
2 Gerry Thornley: Ireland don’t want to box themselves into a corner
3 Former France and Stade Francais winger Dominici has died aged 48
4 The Offload: Ireland are stuck in no man’s land
5 Owen Doyle: Ireland suffered from officiating of the breakdown
Real news has value SUBSCRIBE