Wenger will be ‘surprised’ if he remains in Premier League 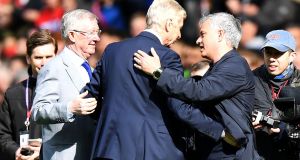 Outgoing Arsenal manager Arsene Wenger says he will be “surprised” if he is working in the Premier League next season although he has yet to consider his options following his departure from the London club.

Wenger will leave Arsenal at the end of this campaign after a reign of almost 22 years that made him the most successful boss in the Premier League club’s history.

He was presented with a gift from former United manager Alex Ferguson and current Old Trafford boss Jose Mourinho before Sunday’s game which United won 2-1.

Asked whether he expected to come up against Mourinho again, as a manager, Wenger said: “I don’t know, honestly. He will be at Manchester United next year certainly and I don’t know where I will be.

“I have worked at a top level for 35 years without any interruption and I think I am the only one who has done that. I am in unknown territory. Will I take a break? I will be surprised if I meet him next year,” he said.

Wenger said he was looking forward to a post-match glass of red wine with Ferguson and he also appreciated the warm reception he was given by the United fans.

“Once you are not a danger any more, people love you,” he added with a grin.

“I am thankful to Manchester United because they had a nice gesture. It is the first time I get a trophy before a game. It is very classy from them.”

The Frenchman is hoping to add one final trophy to his honours list at Arsenal and his first in European competition with the Gunners playing their second-leg of their Europa League semi-final against Atletico Madrid in Spain on Thursday.

The first game, at the Emirates on Thursday, ended 1-1 and although Wenger protected most of his regulars by playing a young, experimental side, he still picked up one injury worry with Henrikh Mkhitaryan going off injured in the second half.

Wenger described the Armenian winger’s injury as a “knock on the knee” but said it was too early to say if he, or goalkeeper David Ospina and midfielder Alex Iwobi, who also picked up injuries, are at risk of missing Thursday’s game in Madrid.