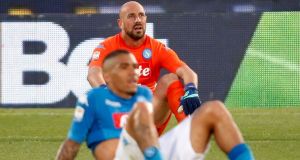 Napoli’s Serie A title hopes were dealt a potentially fatal blow on Sunday when they were thumped 3-0 at Fiorentina after defender Kalidou Koulibaly was sent off in the eighth minute and the hosts took advantage with a Giovanni Simeone hat-trick.

The defeat left Napoli four points behind leaders Juventus with three matches to play, only a week after re-igniting the title race with a last-minute win away to the Turin side.

Juventus beat Inter Milan 3-2 on Saturday after scoring twice in the last five minutes against opponents who played for over an hour with 10 men.

The game hinged on the first attack when Simeone broke clear of Koulibaly -- scorer of the winner at Juventus last week -- and was felled as he was about to shoot.

The referee at first gave a penalty to Fiorentina and booked Koulibaly but changed both decisions after a VAR review.

After seeing that the incident had taken place outside the area and that Koulibaly had denied Simeone a clear scoring chance, he changed the penalty to a free kick and the yellow card to a red.

Napoli never settled after that and fell behind to another long ball forward to Simeone who broke clear and slotted the ball past Pepe Reina in the 38th minute.

Dominant Fiorentina extended their lead in the 62nd minute when Simeone scored from close range after the ball pinged around the Napoli area following a corner.

The son of Atletico Madrid coach Diego capped his performance -- and Napoli’s misery -- when he was sent clear by again and slotted past Reina in the 90th minute.

In the afternoon games, AC Milan won 2-1 at Bologna to end a six-match winless run.