Olivier Giroud on the double as Arsenal hammer Huddersfield 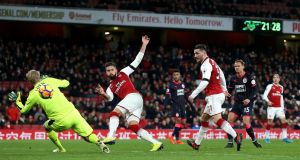 It still feels slightly premature, with the cracks not fully repaired after a fraught start to the season, to declare that Arsenal will not look back now that a corner has been turned. They have, after all given their critics generous ammunition in recent years. Yet Arsène Wenger is the Premier League’s perennial optimist and, despite enduring a couple of fretful moments after Alexandre Lacazette’s early strike, this was the kind of flowing performance to make him believe that Arsenal are heading in the right direction again.

They have done well to respond to being outplayed by Manchester City at the start of this month, rebuilding with three consecutive wins and clean sheets to leave themselves looking down on Tottenham Hotspur and in a good place before Saturday’s visit from Manchester United. Mesut Özil was inspired, scoring once and creating goals for Alexis Sánchez and Olivier Giroud as Arsenal eventually tore past Huddersfield Town.

Nothing cheers people up in this part of the world like getting one over on the neighbours and, 10 days after muting talk of a power shift in north London, it was crucial for Arsenal to remain on an upward trajectory on a bitterly cold night at the Emirates Stadium. Beating Tottenham has given fresh meaning to a season that was drifting a little until that joyous afternoon and Wenger’s men looked determined to make it a miserable night for Huddersfield, waltzing through a packed defence to take the lead with their first attack.

Some of Arsenal’s early invention was a joy to behold, all dainty one-touch passing and sharp movement off the ball to leave the home fans cooing at their side’s silkiness, and the organisation that allowed Huddersfield to come within a whisker of earning a famous draw with City on the weekend was nowhere to be seen when the visitors fell behind in the third minute. Granit Xhaka and Özil were prominently involved, not that there was much resistance as they strolled through the middle, and the danger was clear as soon as Aaron Ramsey’s brilliant flick found Lacazette, who took a touch before beating Jonas Lossl with a calm finish.

Despite making six changes, Huddersfield lacked energy and purpose at first, leaving too much space for Arsenal to pierce their 5-4-1 system. Lacazette, such a composed presence in the box, was never going to waste the chance and the striker almost added a second midway through the half, only to see his improvised lob hacked off the line. Sead Kolasinac was under pressure when he turned the rebound over from close range.

It began to feel too comfortable for Arsenal, whose intensity dipped, and Huddersfield had shaken off the cobwebs as the interval approached. A slack pass from Xhaka allowed Steve Mounie to stretch his legs for the first time and Özil was finding it a bit harder to dictate play. Mounie had a risible appeal for a penalty waved away – the striker appeared to make too much of minimal contact from Shkodran Mustafi – and Huddersfield’s best chance came when Colin Quaner burst through, only for a slight delay to allow Laurent Koscielny to make a crucial block.

Those were warming moments for Huddersfield and they made Arsenal sweat at the start of the second half, creating two glorious openings with some incisive play. However Cech stuck out his right foot to deny Quaner after the Huddersfield winger surged past Nacho Monreal and then the Arsenal goalkeeper scrambled to push Mounie’s deflected shot on to the bar.

The natives were growing restless, but Huddersfield’s increased ambition left gaps for Arsenal to exploit on the break. Özil, who was back after missing Sunday’s win over Burnley because of illness, snatched at a chance, while Giroud should have eased his side’s nerves after being released by Ramsey. After rounding Lossl, though, the substitute sent his shot against the woodwork. However Giroud, who had replaced Lacazette during the break, soon made amends for that miss, sweeping home after a sublime interchange between Özil and Sánchez.

Özil provided the final pass from the left and it was clear that the impudent German had run out of patience with Huddersfield. Soon he was crossing for Sánchez to clip past Lossl and then he added a fourth, moving on to Ramsey’s pass and scooping a delicious finish over the Huddersfield goalkeeper. Huddersfield’s agony was complete when Giroud smashed in a fifth near the end. Arsenal, as has so often been the case in the latter part of Wenger’s reign, have a grip on fourth. – Guardian service