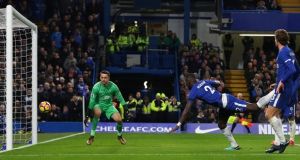 These are nervous times for Paul Clement. In a week that will see two of Swansea’s relegation rivals appoint new managers, a narrow defeat to the reigning champions away from home – courtesy of Antonio Rüdiger’s second-half header – does not sound like the worst result. Yet the manner of this performance in which Swansea barely mustered a shot in anger and with the Welsh club now the only team in the bottom five not to have parted company with their manager this season, it is clear that his time is running out fast.

The sending off of his counterpart Antonio Conte just before half-time for a bizarre tantrum at the fourth official had perhaps given Clement a glimmer of hope that this could be his night. But those hopes were dashed when Chelsea finally took the lead and never looked like surrendering it as they maintained their faint hopes of retaining the Premier League title they won with such style last season.

Clement had selected the same team that drew with Bournemouth on Saturday, with Wilfried Bony leading the line in place of Tammy Abraham as the on-loan striker was ineligible to play against his parent club. There was a third consecutive start in midfield for Renato Sanches, the Portugal international on loan from Bayern Munich, with Jordan Ayew also tasked with providing Bony with support.

For the first time in a Premier League match since he arrived at the club, Conte opted to leave César Azpilicueta on the bench for a Premier League match, ending a run of 74 consecutive starts in which he has played every single minute. Antonio Rüdiger took his place, with Eden Hazard also surprisingly left on the bench in favour of Willian and a recall for Cesc Fàbregas in place of Danny Drinkwater.

This was Clement’s second return with Swansea to the club where he spent more than a decade working as a youth coach before progressing to become Carlo Ancelotti’s assistant.

While he managed to navigate Swansea to safety last season, things have steadily declined to the extent that the club’s owners are already rumoured to have sounded out Tony Pulis over his potential availability. On this evidence, even he will have his work cut out solving their defensive issues, with Chelsea repeatedly creating chances throughout the first period.

One particularly bad moment was when Kyle Naughton’s attempted clearance fell at the feet of Davide Zappacosta, who forced Lukas Fabianski into a save – underlining the point that Swansea do not make things easy for themselves.

Against a team boasting Álvaro Morata that is never a great idea and the Spain striker came closest to breaking the deadlock with a header from a corner in the 22nd minute that was turned over by the goalkeeper.

Fabianski produced an even better effort when Morata connected on the volley with Fàbregas’s pinpoint cross, while Marcos Alonso wasted another golden opportunity from a corner.

When Alfie Mawson’s touch diverted a cross and the referee Neil Swarbrick awarded a goal kick, Conte’s frustrations boiled over. He was sent to the stands after shouting directly in the face of fourth official Lee Mason as Swansea somehow made it to the break on level terms.

It was no surprise to see Leroy Fer replace Sanches for the second half given the number times the 20-year-old Portuguese had given the ball away in a hapless opening 45 minutes. But if Clement was hoping Fer could stem the tide then he was badly mistaken. Within 10 minutes, Chelsea were in front thanks a slice of good fortune as N’Golo Kanté’s shot from just outside the box deflected off the head of Bony and straight into the path of Rüdiger to head home. Another brilliant save from Fabianski to deny Morata kept Swansea in touch, although they offered precious little threat going forward themselves, aside from a wild effort from distance by Fer.

The return of Victor Moses after six weeks out with a hamstring injury – swiftly followed by the introduction of Hazard and Drinkwater from the bench – was Chelsea’s attempt to kill off the game. The change almost had the desired effect as Swansea were once again forced to scramble the ball away from under their own crossbar after good work from the Belgian. At the other end, substitute Wayne Routledge had a golden opportunity to rescue something from the game late on but his cross was, like Swansea, severely lacking in quality. – Guardian service