Ireland hold out for a draw with all-conquering Holland 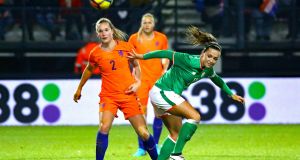 They rode their luck at times in Nijmegen but the Republic of Ireland remain well in contention to challenge for World Cup qualification after stopping the Netherlands from extending their winning run to 12 matches.

Although the European champions were far superior in terms of possession and chances, Colin Bell’s side withstood the pressure to remain unbeaten after three games of their tilt at reaching the 2019 showpiece France.

They even accomplished their best ever result with goalkeeper Marie Hourihan picking up a muscle injury in the second half which forced her to kick with her weaker foot.

Those misdirected deliveries heaped more pressure on the Girls in Green but they managed to withstand the pressure to nick a precious point.

Conscious of the need to coral the Dutch attacking threat, Bell started with a new formation by dropping Niamh Fahey from midfield into defence across a back five.

The change proved successful as Vivianne Miedema, the 21-year-old chasing her 50th international goal, was denied the space she thrives on and spent most of the game with her back to goal.

On the rare occasion of a defensive lapse, when her Arsenal teammate Louise Quinn was failed to clear on the edge of her box, Ireland were saved by the post from the striker’s ferocious low effort.

The Dutch were forced to work hard for the rest of their chances, with Ajax defender Stefanie van der Gragt twice left frustrated by goal line clearances from 16-year-old Tyler Toland.

Miedema missed a couple of half-chances to pinch the win, while Lieke Martens nodded over from a corner, but the jubilant scenes at the end were well deserved by the Irish heroines.

“Not many teams will get a result here, so credit to the players for sticking to the game-plan and shutting the Dutch out,” said Bell.

“Having watched Holland dominate at the Euros, we had to play three centre-backs and they, along with wing-backs Sophie Perry and Harriet Scott, were superb.

“It is early in the campaign but all we want to do is get amongst the top seeds in the group, Holland and Norway, and see where that takes us.”

1 GAA players spend just 2.5 seconds within 2m of each other during play
2 How a GAA club sprang up in east Belfast over Sunday breakfast
3 The Irish Times shutdown sports quiz: Part one
4 Drew Brees apologises after LeBron James leads backlash to anthem comments
5 ‘Why do you need the money now?’: Schalke apologise for ticket refund questions
Real news has value SUBSCRIBE
Crossword Get access to over 6,000 interactive crosswords