‘So I just wait, wishing that they will have an understanding but it’s out of my control’ 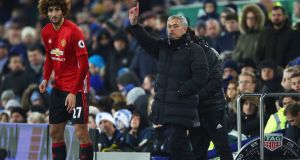 Jose Mourinho is hopeful that his midfielder remains at the club. Photograph: Getty Images

Jose Mourinho is worried Marouane Fellaini will leave Manchester United in the summer as contract talks continue to drag on.

The 30-year-old has endured a difficult relationship with United supporters at times but has become an influential player under the Portuguese.

That form was recognised as the Red Devils triggered the one-year extension in Fellaini’s contract at the start of the year, but agreeing a deal beyond the summer is proving difficult.

It’s understood that United have no intention of cashing in on the midfielder in January despite talks stalling and a contract being rejected at the start of the campaign.

Asked if he was worried that Fellaini would not be here next season, Mourinho said: “Yes, I am.”

When asked if there was anything he could do to turn it around, the United boss added: “Nothing. It is a discussion between the player and the board. I am not involved in contracts, in deals. And I respect both.

“So I just wait, wishing that they will have an understanding but it’s out of my control.”

Besiktas, Fenerbahce and Galatasaray have been linked with a move for the Belgium international.

Despite the speculation, the 30-year-old is set to be involved when Brighton arrive at Old Trafford on Saturday.

However, Mourinho’s hopes of having Eric Bailly back for the game have been dashed, while Phil Jones’ injury means Marcos Rojo could play again after ending his long injury lay-off in the midweek Champions League defeat at Basel.

“Just the evolution was not good enough to have him back for the game, so Bailly is out and Jones are out.

“Rojo played very well. We have to see how he is today. There is no more injury in the frame but fatigue, maybe a player that played his first match maybe he feels it a little bit.”

Paul Pogba is set to start again but not risked beyond 70 minutes, while Zlatan Ibrahimovic is to continue his return as a substitute.

“No, not ready (to start),” Mourinho said of Ibrahimovic. “Not ready. Step by step, minute after minute, match after match, I think it is easy to play him if the team is losing — you need him on the pitch for the last 15 or 20 minutes.

“If the team is winning, you need him on the pitch for the last 15, 20 minutes because his qualities are adapted to both situations.”

The return of such players is important at a crucial stage of the Premier League campaign, with second-place United facing Brighton, Watford and Arsenal in quick succession.

“We have four competitions to play and let’s go step by step, it’s the only thing we can do,” added Mourinho, whose side enter the weekend eight points to leaders Manchester City.

“Match after match, Champions League finished against Basel, we switch off and move to the Premier League.

“It is an interesting week because I think is the first time this season where we have three Premier League matches in one week.”

1 World Rugby study advises removal of reset scrums to reduce Covid-19 risk
2 Ken Early: Liverpool fans, Bamber Gascoigne and a close shave in Istanbul
3 Tiger shines and Brady bites back as charity match proves an enjoyable release
4 Sideline Cut: Vignette shows why Bird is the true shark in The Last Dance
5 How Mary Pierce stepped into the light and played for herself
Real news has value SUBSCRIBE