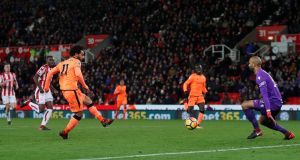 Some of Liverpool’s victories this season have been devastating displays of attacking football, the sort that make you glad to be a football fan. This wasn’t one of those, a victory of solid efficiency rather than rampant flair, but it will be no less valuable. A first-half goal from Sadio Mané and a late brace from substitute Mohamed Salah were enough for Liverpool to win this one, a win over a Stoke side who were utterly desperate, even by their reasonably low standards this season.

Particularly not when Joe Allen walloped a half-volley way over the bar after a cushioned Peter Crouch header set him up around 10 yards from goal. The groans from the home fans were almost a constant background noise, only briefly punctuated when Bruno Martins Indi and Alex Oxlade-Chamberlain went nose-to-nose over a foul by the former on the latter.

With 13 minutes remaining, Liverpool scored again. Mané made Ryan Shawcross look foolish on the right side of the area, zipping around him like a speedboat circling an oil tanker, before clipping a cross to substitute Salah at the far post. Initially the ball looked a little deep, but Salah set himself and hammered an unstoppable volley into the roof of the net.

Jürgen Klopp got creative with his starting line-up again, making six changes from the team that drew with Chelsea at the weekend, including giving a first Premier League start to the young forward Dominic Solanke. For Stoke, Crouch began his new one-year contract by coming back into the starting XI against one of his former clubs.

Stoke looked to frustrate their guests early on, not quite parking the bus but forming a sort of rolling road block, sitting fairly deep and trying to make their opponents pass through them rather than giving space behind. Initially, at least, it was like trying to push a thumb through a thick block of cheese.

But then in the 16th minute Liverpool took the lead amid a chorus of boos. The Stoke fans were already unhappy that Alberto Moreno had not been penalised for a challenge on Xherdan Shaqiri, but their ire was raised further when the referee’s assistant ruled Joe Gomez had kept the ball in on the right byline. Replays suggested at least nine-tenths of the ball had crossed the line, so they may have had a point, but they should be more irked with the way their defence stood still when Solanke neatly laid off the cross to Mané, who delicately lifted it over Lee Grant and into the net.

For a spell Stoke were knocked off their gameplan by that early goal, but gradually they edged their way back into the game. Shaqiri was a constant, boxy menace and the lofted balls played towards Crouch always looked as if they would cause some panic in a Liverpool defence not known for its granite solidity on the road: before this game 16 of the 18 goals they conceded were away from Anfield.

The referee Martin Atkinson then produced an entirely inexplicable decision a few minutes before half-time, when Simon Mignolet rushed out of his goal and hacked down Mame Biram Diouf just outside the area. The Liverpool keeper was only given a yellow card, presumably on the basis that Diouf’s run was angled slightly away from goal and there were defenders roughly in the same postcode, but he also would have had an open goal. Atkinson seemed to be the only man in the stadium not convinced a red should have been issued.

Stoke nearly levelled a few minutes into the second-half, when the ball fell to Joe Allen in the area, the goal virtually opening its arms and ushering the ball in from the biting cold, but it took a deflection and skipped just wide. From there Liverpool were broadly in control, not necessarily because of their own brilliance but more due to Stoke’s inadequacies. A formation change saw Diouf move from right wing-back to striker, like a Senegalese Paul Warhurst, but it did them little good.

It was 3-0 a few minutes later. More deeply questionable defending saw Erik Pieters woefully misjudge a header back to Grant, Salah leapt on the ball and tucked it home with the confidence of a man in the form of his life. Which, as it happens, he is. All that was left to do was for Mark Hughes to bring on Charlie Adam, as if to remind Liverpool that their team hasn’t always been lightning fast, dynamic young colts. The away fans spent the remainder of the game merrily singing Christmas songs. – Guardian service