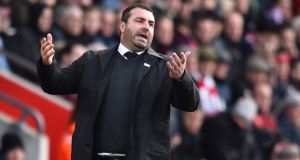 Everton crumbled to pieces for the second time in four days as their disastrous season continued with a chastening defeat at Southampton. Everton’s resolve was again totally absent as a far superior Saints side picked off David Unsworth’s men, with Steven Davis completing the rout after Dusan Tadic’s opener and a Charlie Austin double. By the final whistle, Gylfi Sigurdsson’s spectacular equaliser was a distant memory and relegation to the Championship an ever increasing fear.

Everton were slapdash in possession, shirked countless challenges and most passes were aimless. This was the meekest attempt to put right the wrongs of the capitulation at the hands of Atalanta on Thursday, but instead another gutless performance that again left the caretaker manager David Unsworth grimacing. For Mauricio Pellegrino, who compared managing Southampton to going to the gym in midweek, this domineering and confident showing was evidence of significant progress.

The opening exchanges were played out amid an eerie backdrop at St Mary’s, with both teams badly in need of some light relief. Pellegrino tweaked personnel, handing Austin his first league start of the season, as Southampton sought only a third home win this season.

Unsworth, meanwhile, made eight changes from the team who were thumped by Atalanta in midweek, including dropping Wayne Rooney who remained on the bench throughout here. But 72 hours on, it was the same old story with this Everton display equally torturous viewing.

The only surprise when Everton fell behind after 18 minutes was that it had taken so long for Saints to inflict such damage. Austin had stabbed wide and struck the woodwork before Tadic rounded off a superb sweeping team move. His deft finish trickled through the legs of Jordan Pickford, the Everton goalkeeper, after racing on to a brilliant Ryan Bertrand pass. Pickford erupted, angered at the gaping hole between Michael Keane and Leighton Baines, soon after replaced by Ashley Williams, after Phil Jagielka got sucked in to the ball.

Everton were a defensive shambles, and as another chance flew past Pickford’s post, a smattering of boos rang out from a pocket of fans in the away end.

In fairness, few could have foreseen Everton’s next move. With the half-time interval fast approaching, Sigurdsson picked up the ball 25 yards from goal, seemingly no danger until he jinked inside on to his right foot, fooling Southampton’s Davis and Virgil van Dijk all ends up in the process. He then wrapped his boot around the ball, sending a crashing effort goalwards, which then pinballed between the bar, post and then bar before falling into the goal via the cushion of the side netting.

Fortunately for Southampton, Everton soon returned to their bad habits after the break. More slack defending allowed Bertrand to ghost in down the left flank, who again turned supplier to feed Austin at the near post, with the striker comfortably beating Keane and Williams in the challenge to thunder his header home, in off the crossbar. Five minutes later, with Everton’s defence again at sea, an unmarked Austin powered home beyond a hapless Pickford, except this time it was Tadic’s cross.

Southampton almost added another through the substitute Shane Long, but Pickford saved after the striker wriggled free of Jagielka. Saints did, though, find a fourth when Davis fired low two minutes from time. A tired shake of the head from Unsworth at full-time said it all.