Newcastle leave Bournemouth battered and bruised and staring into the abyss 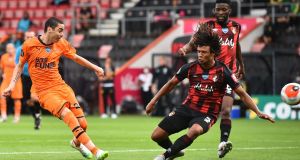 By the end, it was bordering on unfair. This was a futile Bournemouth performance, one that screamed relegation and they have now lost 16 of their past 21 games. Allan Saint-Maximin was influential as goals by Dwight Gayle, Sean Longstaff, Miguel Almirón and Valentino Lazaro chalked up Newcastle’s biggest win of the season. Victory should have been more emphatic, too, with Isaac Hayden missing a sitter after Lazaro smacked the crossbar.

Eddie Howe, hands on hips, stood forlorn on the touchline as his team, battered and bruised by a hungry Newcastle side, were finally put out of their misery just after Dan Gosling’s late strike.

Howe said he hoped Bournemouth could use their fragility to their advantage by sparking their survival mission into life but this was a desperately brittle display. Defeat leaves them ensconced in the battle to avoid the drop with six games to play and time is running out. As for Newcastle, in their orange strip, they were vibrant from start to finish.

The interval did provide a dash of respite for a Bournemouth team not only bullied but also outplayed by a team not exactly renowned for being easy on the eye. The visitors toyed with the hosts, fizzing the ball around at speed, just like Bournemouth used to. But Bournemouth were a shadow of their former selves and went into their shells from the moment Gayle opened the scoring when Newcastle preyed on Jefferson Lerma dallying on the edge of the area. Lerma’s heavy touch led to a collision with Longstaff and the superb Saint-Maximin seized possession before slipping in Gayle, who raced into a gaping defensive hole and finished clinically.

Gayle was ably flanked by Saint-Maximin and Joelinton, who appeared more comfortable operating wide, while Longstaff proved a nuisance and was never too far away from the action until being replaced by Almiron after pulling up clutching his hamstring.

Bournemouth came undone in defeat at Wolves 10 days ago courtesy of Adama Traoré flicking on the afterburners and here it was Saint-Maximin’s quick feet that got the better of the full back Adam Smith as Newcastle doubled their lead. It was not just Smith who was startled by Saint-Maximin’s trickery; the winger occupied Lerma and David Brooks before breezing beyond the trio and cutting the ball back from the byline for Longstaff to lash into the roof of the net.

It was the same story for Newcastle’s third approaching the hour mark, with the mesmirising Saint-Maximin again at the heart of things. He laid the ball centrally for Almirón, who kept a string of defenders at arm’s length before beautifully nestling the ball into the top corner with his right foot.

It was such a stroll that Steve Bruce had the luxury of being able to withdraw players with half an hour to play. Saint-Maximin, replaced by Lazaro, would surely have departed to a standing ovation had the Newcastle supporters been here to witness another excellent display.

It proved a chastening night for Lloyd Kelly to make his first Premier League start since joining from Bristol City, with Saint-Maximin and Lazaro unrelenting.

Howe tweaked personnel at the break and Bournemouth began the second half with a glimmer of gusto but any hope soon diminished. King headed in 25 seconds into the second half, sparking Martin Dubravka to tell his defence to wake up, but the Bournemouth striker was offside after nodding in the rebound from a deflected Dominic Solanke effort.

Solanke, whose sorry record now reads one goal in 37 appearances since joining from Liverpool, started up front in the absence of the suspended Callum Wilson but the striker looked totally lost. He was not the only one. –Guardian