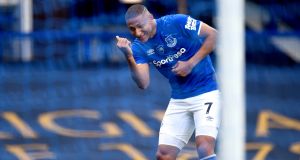 Champions League restrictions may be imposed on Leicester thanks to 2020’s downturn. Brendan Rodgers can feel the breath of Manchester United and Wolves on his side’s neck after their search for a first win since the restart continued at Everton.

Carlo Ancelotti’s team condemned Leicester to a costly defeat at Goodison Park that threatens their long residence in this season’s top four. The visitors have been in the Champions League places for every week bar one since August 24th but the gap between them, United and Wolves is narrowing, and confidence appears a deep-rooted problem at the club. They were two goals down before hitting their stride against Everton and despite a stirring second half response, it is now only 13 points from a possible 36 this year for Rodgers’ side.

The Leicester manager had the notebook out and a face like thunder with only 16 minutes gone at Goodison. No wonder. Before kick-off he had stressed the importance of rebuilding confidence with a vibrant start but his team opened passively and carelessly. Everton’s incisiveness and VAR combined to leave the Champions League-chasers in desperate trouble.

There was an early chance for Jamie Vardy to finally reach a century of Premier League goals when released inside the penalty area by Youri Tielemans. Once that was snuffed out by Lucas Digne and Jordan Pickford, however, the striker was an isolated figure in the first half as the home side’s superior distribution, concentration and work-rate put them in control.

Richarlison made the swift breakthrough after Everton sliced through a ball-watching defence. Digne released Anthony Gordon with a deft header from Mason Holgate’s pass and the 19-year-old, making only his second Premier League start, cut the ball back perfectly from the byline for the Brazilian to beat Kasper Schmeichel with an emphatic close-range finish.

Gordon had been handed a full debut against Liverpool not because Everton want more academy graduates in the team, Ancelotti admitted, although that is a bonus, but because he merited one. The intensity of the derby made for a difficult grounding, but the teenager’s touch and vision impressed here. He released Dominic Calvert-Lewin for what would have been a second Premier League assist only for the covering Caglar Soyuncu to brush aside the striker legitimately inside the area.

Everton had the cushion of a second goal by that stage and, no doubt to their great surprise, it arrived from the penalty spot six minutes after Richarlison’s opener. Wilfred Ndidi leapt with Michael Keane when Digne swept a free-kick deep into the Leicester penalty area and clearly connected with a hand, as the reaction of several Everton players attested.

VAR required several minutes to decide whether the ball struck Keane’s head or hand before finding its way on to Ndidi. A tight call went against Leicester’s holding midfielder and Gylfi Sigurdsson rolled the resulting spot-kick – Everton’s first in 39 league games – confidently past Schmeichel.

Leicester’s goalkeeper smashed the ball into an empty main stand in disgust after a mix-up between Soyuncu and Ben Chilwell gifted Everton a needless throw-in. The visitors’ recovery was slow in coming and Everton defenders were quick to throw their bodies in the way of danger when it eventually materialised. Keane blocked a Tielemans volley from a corner, Pickford saved at Jonny Evans’s feet and Digne denied Marc Albrighton when presented with an opening at the back post. Leicester finished the half brightly, but it required Rodgers’s intervention during the interval to transform the course of the contest.

The introduction of Kelechi Iheanacho and James Maddison injected greater impetus, ideas and numbers into Leicester’s attacking play and Everton were on the back foot throughout. Iheanacho reduced the arrears when Vardy flicked Tielemans’s cross into his path inside the area. The striker’s first touch was heavy but Holgate hooked an attempted clearance back into the face of Iheanacho and the ball sailed past Pickford.

Luck favoured Leicester on that occasion but switched to Everton’s side when Pickford fumbled Albrighton’s low cross from the right. The ball struck Keane and trickled goalwards but the central defender was just able to clear on the line.

Ancelotti introduced a midfielder for a striker, Tom Davies for the injured Richarlison, to combat Leicester’s dominance of midfield. He then reverted to a back five with Yerry Mina but the pattern of the game remained unaltered. Iheanacho fired over after Pickford failed to reach another, deeper cross from Albrighton and Sigurdsson denied the substitute Ayoze Pérez with a vital challenge in stoppage time as Everton held out. – Guardian