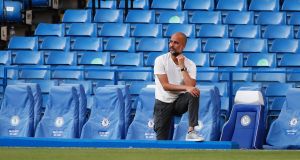 City fell to an eighth league defeat of the season at Stamford Bridge after a penalty from Willian secured a 2-1 victory for Chelsea after Christian Pulisic had opened the scoring in the first half. Kevin De Bruyne’s free kick briefly ignited hopes that the visitors could keep the title race alive but Fernandinho’s dismissal for a deliberate handball finally ended their resistance in the second half.

Guardiola congratulated Liverpool on their title but admitted his side have lacked consistency over the course of the season.

“They have played an incredible season,” he said. “We are not consistent like the previous seasons – I think we arrive after four trophies in one season thinking: ‘We have time, we have time,’ but Liverpool won the Champions League and it gave them an incredible confidence. The fact that they had gone 30 years without winning the Premier League gave them incredible focus and they played every game like it was the last game. In the beginning we didn’t play in that way and when they took that advantage of course the pressure on us was bigger.”

Guardiola added: “We cannot forget that we won two titles. This is incredible success for us, for the club; the last six, seven, eight years. So we have to take a little perspective, be humble, and say: ‘Not all the time we can win.’ And then we must learn what we need to do to avoid this situation again.”

Chelsea’s victory strengthened their grip on fourth place after victories for Manchester United and Wolves on Wednesday but their manager, Frank Lampard, acknowledged his side must improve if they are to challenge for the title again themselves.

“I don’t think this game decided the title,” he said. “It was decided a long time ago through Liverpool’s consistency and performances. Fair play to them of course – I give them full credit. They deserve to win it and I know the hard work that goes into winning the title. For the last three seasons them and City have been out on their own pretty much and that’s down to a lot of hard work from Jürgen Klopp and Pep Guardiola. It’s a gap that we want to try and bridge but they are two of the best teams in the world and they are there for a reason.

“We just have to look at ourselves,” Lampard added. “One result and a good performance against City is a great feeling for us tonight but the reason we are so far behind is the great levels of consistency that those two teams have reached so it won’t happen overnight.” – Guardian