Man United show the swagger of old as they dispatch Brighton 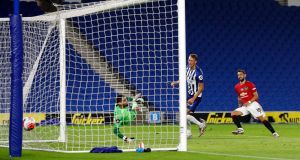 With Bruno Fernandes providing an irresistible spark, the sense of possibility felt tantalising for Manchester United. Brighton are not a team that have been rolled over too many times this season, despite their lowly position, but the ease and panache with which United recorded their latest positive result represented a statement of intent.

Ole Gunnar Solskjær had said on Monday that his team could go undefeated for the remainder of the season. Play like this and they will. The run-in is relatively kind for them and this was a 15th game in all competitions without a loss – the best sequence under Solskjær.

The victory was ignited by Mason Greenwood’s 13th goal of a stellar season but, really, it was all about Fernandes. He was playing only his 13th game for the club and yet it feels as though he has been here for a professional lifetime.

Playing behind the lone central striker, Anthony Martial, Fernandes roamed with menace, linking up the play and adding the second and third goals – the latter a sumptuous volley following a Greenwood cross. Brighton kept going until the end and they were unlucky not to register reward for their spirit. This was United’s night.

For Brighton, this had felt like a free hit. Having taken four points from Arsenal and Leicester, more than their most hopeful supporters might have expected – after no wins previously in 2020 – they had entered the game firmly in credit. Norwich on Saturday is the big one for them. They wanted to nick something extra before then.

As Solskjær started with his most potent attacking line-up, Graham Potter tried to keep things compact, with two lines of four behind Alexis Mac Allister and Aaron Connolly. Tariq Lamptey, who is better known as a right-back, played at right midfield. Brighton did not want to commit too many numbers ahead of the ball. The plan was to contain but it would be undermined.

United made the perfect start. Fernandes had advertised their threat with a thumping low drive that came back off the post, with Mat Ryan beaten and, shortly afterwards, they went ahead. Mason Greenwood has been knocking loudly on the door to be a starter in Solskjær’s best XI and, having been given another chance on the right flank, he offered an early illustration of his burgeoning confidence.

From a Brighton point of view, Greenwood was given too much space to sprint in on goal, Dale Stephens having been caught on the wrong side as the 18-year-old accepted a pass from Aaron Wan-Bissaka. What followed was all about Greenwood’s skill and balance. He stepped over the ball twice to unsettle Lewis Dunk before unloading low and hard with his left foot for the near corner. It is fast becoming his trademark move. Ryan was powerless.

With Fernandes and Paul Pogba in the team – the latter in a deeper-sitting midfield position – Solskjær is trying to evolve fresh options. A criticism in the past has been that United were overly reliant on balls up the channels for their quick forwards, in a counter-attacking style. Now, they are better equipped to play through teams. Some of their movement and interplay was extremely easy on the eye.

Fernandes’s ability to ghost into spaces from the No10 role, together with his penetrative passing and readiness to shoot, has added a new dimension and it was the January signing that put United in charge before the half-hour.

Marcus Rashford released the overlapping Luke Shaw – replays showed that the left-back was onside – and his cut-back ran all the way through for Pogba, who turned it inside to Fernandes on the edge of the area. The shot deflected heavily off Alexis Mac Allister to wrong-foot Ryan.

Potter had to act at half-time and, with nothing to lose, he introduced the attack-minded Leandro Trossard for Lamptey and a striker for a midfielder – Neal Maupay for Davy Propper. Brighton got onto the front foot for five minutes or so and then they were floored by a devastating United counter.

Nemanja Matic took one touch from a clearing Harry Maguire header before releasing Greenwood with a weighted ball out left. Greenwood promptly raced into a crossing position and his delivery for Fernandes was deep and inviting. It became a question of whether Fernandes, who had timed his run, had the technique to execute the right-footed volley. The answer was emphatic. It was only United’s third shot on target. Ruthlessness was a big part of the performance.

Brighton were left to play for pride but they showed it. Trossard went close on two occasions while David De Gea saved smartly from Connolly and Maupay. United might have got a fourth through the substitutes Brandon Williams and Scott McTominay. - Guardian