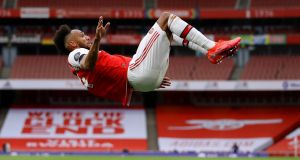 On a balmy night at the Emirates Arsenal eased their way past a Norwich City team that showed all the resistance of a decorative bead curtain. Pierre-Emerick Aubameyang scored two and made one in a 4-0 victory, and looked like he wouldn’t mind playing these opponents every night of the week for the rest of this eerie summer off-season.

Norwich were poor, defending throughout like a team unfamiliar with the basic concept but willing to give it a try. Daniel Farke’s team is running out of games, but also conviction. Arsenal, meanwhile. will take some heart both from the result, and from some assured performances, not least from the excellent Dani Ceballos.

Three wins in a week. Seven wins from the last 10. There may be flaws and holes and wobbly wheels on this evolving Mikel Arteta-built Arsenal team, but something is happening here.

The switch to three at the back in the last few games has brought some success. It seems unlikely this was Arteta’s Plan A. But as the saying goes, when life gives you lemons, make a back three with David Luiz in it.

Norwich made one change, Tom Trybull coming into the midfield. Arsenal gave a start to Reiss Nelson, his first in the league this year. And the Emirates was a breezy, clean, eerie kind of place at kick-off, a powder blue June sky peering over the vast empty cantilevered stand. This is a stadium conceived and built in the name of full houses, hospitality spend and many other things that aren’t happening right now.

Aubameyang had the first sight of goal, taking the ball after Granit Xhaka’s surge through a vacated midfield, and drawing a good save from Tim Krul.

Norwich spent those early moments arranged in a deep defensive block. The centre half Ben Godfrey produced the closest thing his side got to a goal with 20 minutes gone, striding forward, finding no resistance, then spanking a shot from 30 yards on to the angle of the post and bar.

Steadily Ceballos began to take charge of midfield, and to take charge of the ball generally, striding around like the only grown up on the pitch, keeping possession in tight spaces and finding some telling angles near goal.

Lukas Rupp was booked just after the half hour for hacking him down a little desperately. And two minutes later Arsenal were ahead, the goal a product of a horrible mistake from Tim Krul, who tried and field to dribble around Aubameyang when he should have been hoofing the ball upfield.

Aubameyang pressed hard and block-tackled Krul, then cut the loose ball back and into the net from the right edge of the box. It was Aubamyang’s 50th Premier League goal in 79 games, the quickest Arsenal player to that mark. The post-Highbury period of drift has been dotted with starry underachievers. He hasn’t been one of them.

Four minutes later later it was 2-0. This was a fine team goal, sparked by a wonderful high punted David Luiz pass out to an unmarked Kieran Tierney on the left touchline. He took the ball down and found Aubameyang, who played a perfectly weighted pass for Xhaka to shoot low and hard past Krul.

There was time for Emiliano Martínez to produce a fine save from Kenny McLean’s free-kick. But the half had been defined by the incision of Aubameyang, whose game was a masterclass in attacking minimalism. His 18 first-half touches included three shots, all on target, plus the opening goal and an assist for the second.

Ireland under-21 striker Adam Idah replaced the flaccid Teemu Pukki at half-time, an immediate upgrade. And Norwich were suddenly the aggressors as Arsenal exhaled. These things are of course relative. A 10-minute hounding from this Norwich City attack may be the footballing equivalent of being thrashed with a handful of dust-wipes, or roughed up by a platoon of squirrels. But stronger opponents will take advantage of this kind of doziness.

Instead Arsenal roused themselves and scored a third, helped this time by a terrible pass across his own goal from Josip Drmic. The ball ran straight to Aubameyang, who took a touch and slid it past Krul with the minimum of fuss.

Cedric Soares added the fourth with a fine drive. And Arsenal ended the evening in seventh place, a point above Tottenham. – Guardian

1 Seán Moran: It won’t take much before cancelling All-Ireland looks like a solution
2 Madigan’s primary goal is Ireland caps after switch to Ulster
3 Cyrus Christie recalls racial abuse from a child at Ireland training
4 My sporting disappointment: Battered, bloodied, broken by The Wall
5 View from Melbourne: Sporting fabric of the city suffering from second lockdown
Real news has value SUBSCRIBE