For the supporters of certain generations, and the overseas army, this is the sweetest of triumphs 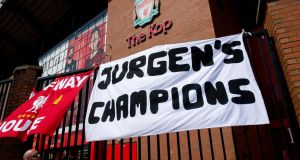 Banners and flags hung up by Liverpool fans flutter from a fence outside the Kop end of Anfield after the club won their first league title in 30 years. Photograph: Peter Powell/EPA

Seán Cox turned 55 years old in April. It’s fair to guess that the Meath man was somewhere in the riot of thoughts flashing across Jurgen Klopp’s mind over the past 48 hours.

If you had told Seán Cox when he was 25-years-old, when yet another spring finished with Liverpool winning the league, that he would wait a full three decades to see his club win its next one, he would probably have laughed at you.

As a city, Liverpool might have been economically broken and socially marginalised in Thatcher’s England of 1990 but the Reds were flinty and arrogant in their knowledge of how to circumnavigate the slog of English football winters.

There may have been romance associated with the rich past but look into the eyes of Graeme Souness, Hansen, McMahon, Dalglish in the 1980s: playing that crew had all the romance of stepping into a bear trap.

Seán Cox became a well known name after the appalling injuries he suffered when he was the victim of a shocking attack by Roma fans before a Champions League game outside Anfield in 2018.

He is also one of thousands of Irish children who, in the decades since 1970, chose to adopt Liverpool as their team. It was and remains a strange phenomenon; how Irish children ‘become’ fans of the football teams of English cities and clubs which they hadn’t even visited when they claimed allegiance.

The national school I attended until 1984 was all-boys and non-uniform so pretty much everyone wore denim jackets with Madness or AC/DC back patches, Dr Marten’s and carried either Liverpool or Man U school bags made of an indefinable material that was, one suspects, highly flammable.

And it was almost exclusively one of those two clubs – Leeds, the glamour club from the previous decade had faded – and it took an independent mind to pledge to Arsenal or Spurs or West Ham.

You probably didn’t understand why you ‘were’ United or Liverpool: it was because your older brother, your best friend, your father was or because you happened to see them win a game on MOTD and it gave you something to talk about. Having a team was just a thing and, for many, it was fleeting and they forgot about their football team, like a box of toys in the attic.

But thousands of others didn’t and as the 1980s turned to the 90s it became more commonplace to make weekend trips to places like Old Trafford and Anfield.

Nonetheless, the reality of being an adult Liverpool supporter in the 1990s and 2000s meant sticking unreasonably with a long-distance passion; it meant sitting in a pub on many dismal Sunday afternoons for Sky’s super Sunday games throughout winters when the teams were either not quite good or nowhere near good enough.

I always found the first incarnation of the Sky Premier League to be hollow and depressing, resenting the move away from BBC and RTÉ Saturday games and despising the obnoxious sound of Andy Gray being played too loudly in too many pubs.

And, probably too, hating the remorseless rise of Alex Ferguson’s United team while Liverpool seemed lost and clueless in this shiny new order. Plus, Liverpool winning or losing never meant quite as much to me after the night in 1989 when Michael Thomas seemed to thieve what felt like the rightful conclusion to what had happened at Hillsborough that April.

But for some of those I went to school with, following Liverpool came to mean more as the years pushed them into adulthood and jobs and relationships and the unceasing demands and rewards of life – that whole caper.

Watching your team is one of the few aspects of childhood that you are permitted to carry with you through the more complex business of being a grown-up.

And for Liverpool supporters, equipped with the delusion that winning the English league was their manifest destiny, the past 30 years were, despite the cult heroes like Fowler and Gerrard, despite the incandescence of Istanbul, like standing on the deck of a ship and seeing a familiar cityscape recede further and further.

One minute, it is 1990 and you are a ten-year-old boy, say, with a Steve Staunton replica shirt. Next thing you are 40 with a mortgage, a young family and knees that hurt on the Wednesday night indoor session.

Time is a goon. And you could see that on the strangest Thursday night, when a league title that had literally become fantastical seemed to land into Merseyside before anyone fully realised it was there.

Certainly, nobody could have predicted the circumstances – on a midweek in late June, dusk after the hottest day of the year when England was boozy and restless; watching Manchester City losing to Chelsea in a deserted stadium in the middle of a pandemic that has, among a thousand other things, changed the patterns and place of sport in society. And it was hard not to immediately turn to the span of time that has passed between the 18th title and this, Liverpool’s 19th.

You don’t have to be a Liverpool fan to see that there is something rare and beautiful about Klopp’s energy and fun and sincerity; he’s a weird combination of genius football tactician and inspirational life coach.

It’s easy to understand why the mythology around Liverpool’s 30-year ‘wait’ drives other football fans around the twist with its implied sense of entitlement. Why should their patience and disappointments hold any more power or poignancy than their city rivals Everton or Tottenham Hostpur?

It’s probably because the history of achievement is so daunting –Shankly and Paisley and Dalglish and Hillsborough – that it all but demanded titles from the footballers and managers associated with the club since 1990.

And there is no doubt that a tragedy as awful and as scarring as Hillsborough – and the families’ three-decade wait for justice – had a profound effect on the psyche of the city and the club.

There were a few seasons when it looked as if Liverpool was a club in danger of collapsing under the weight of its magnificent past. Just before Klopp officially took charge, he watched a game and noticed the lack of joy on the faces of the players; he saw they were inhibited by the burden of playing for a club obliged to win titles.

It took him just four years to convert all of that frustrated intensity and trapped history into a breathtaking and joyful football force, ending the wait. But immediately, his thoughts turned to the people who had toiled through those 30 seasons of disappointment.

And the sun shines now. And there is King Kenny – that remorseless winner, raising a glass of champagne and cracking a smile and at 69-years-old immediately predicting lots of good times ahead – because that’s the Liverpool way.

But for the supporters of certain generations, particularly the long-distance army to which Seán Cox belongs, this is also a weekend for looking back at who they were 30 years ago and concluding that all of it: the waiting, the foolishness, the useless seasons, the fretting, the wondering, has been worth it.

Because how often do you get to feel like a child again?