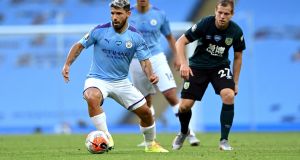 Sergio Agüero, although injured at present, is entering the final year of his contract at Manchester City. File photograph: Getty

Pep Guardiola believes he has to rebuild Manchester City in the next transfer window to compensate for the loss of Vincent Kompany, David Silva and Leroy Sané, and with Sergio Agüero and Fernandinho entering the final year of their contracts.

Kompany departed last summer, Sané is soon to join Bayern Munich and Silva will end a decade at City at the close of this season. Fernandinho and Agüero could sign new deals but their ages – 35 and 32 respectively – also mean Guardiola has to look for replacements.

The manager was asked whether a rebuild was needed. “Yeah – not for the lack of quality but for the absence of Vinny, David; Dinho and Sergio have one year left I – don’t know if they will extend or not,” he said. “Some players have to be replaced. But it’s not a disaster or bad thing, it’s part of football.

“It happens in other clubs – players who are considered important players for the club decide to leave, [also] they don’t want to be here and that was the case for Jadon Sancho [now at Borussia Dortmund] and Leroy.

“We cannot do anything else, as a club. If guys don’t want to stay they have to leave; we are not getting the best of these players if in their mind they are not happy here. This is the first thing and the second is with the age. But it happened and we have to rebuild it . . . You never can be eternal, and we have to accept it and try to take the right decisions as a club to try to maintain the level that we have.”

No return for Sancho

Bayern Munich’s David Alaba is thought to be of interest to Guardiola because of the 28-year-old’s ability to play at left-back and in central defence, two areas he wants to strengthen. The manager ruled out a return for Sancho.

On Thursday City host Liverpool, whose manager, Jürgen Klopp, does not buy into the argument that Guardiola’s team could be weakened next season. Reflecting on the loss of Silva, he said: “Bernardo Silva or [Phil] Foden, Ilkay Gundogan can go in that role as well. They don’t lose players, they replace players. A lot of world-class players are still there.

“If Agüero gets older then Gabriel Jesus is there. They will not stop. Why should they stop? I’m very positive about my team, I couldn’t be more positive, but I cannot deny they are really good and we still wanted to beat them.

“I don’t see any end of any era but what is an era? Maybe an era is just a word from the past and it’s not possible any more. When we won the title the next day people told me we are only a big team if we win it twice or three times or four times. Sorry? Can we at least think for five minutes that we won it one time, which is not too bad because we tried it long enough? That’s the world. I get that 100 per cent. When a new season starts we try to show we want to be in contention again. I cannot see the end of anything for Man City.” – Guardian