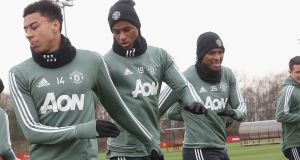 José Mourinho believes that if Manchester City continue their trajectory, then unless financial fair play halts them, it may be many more years before Manchester United are champions again.

United won their most recent title in 2013 and, given they are 18 points behind City, the wait for a 21st seems certain to stretch into a seventh season, at least.

Liverpool have not won the title since 1990. Asked whether United could suffer a similar drought, Mourinho said: “I don’t know what happened in Liverpool. I just know the numbers but I don’t know why. I don’t know [how long for United]. It depends on our evolution but also others’ evolution. If the ones above us keep going in the same direction and if their ambition and investment is continuous, that’s one thing. Another thing is if they stop, or if the financial fair play makes them stop, and then we can close the gap a little bit better.”

City were fined £49 million – later reduced to £18 million – for FFP contraventions in 2014, but Mourinho offered no opinion on whether they may again be punished. “The world is full of suggestions and I never know if they are true or not true,” he said. “And that’s not my job to analyse that.”

He was happier to analyse United’s lack of goals. They have scored only 24 times in the league and Mourinho questioned whether Marcus Rashford and Jesse Lingard, who have found the net twice and once respectively, were natural finishers. “They work very hard but it’s not about work,” he said. “It’s about natural qualities. We need to score more goals.”

City’s Raheem Sterling scored 18 times in the league last season having previously been erratic in front of goal. Yet Mourinho was curt when asked whether Sterling was a good example for Rashford and Lingard. “No,” the manager said.

Mourinho’s future has been the subject of speculation but his agent, Jorge Mendes, has claimed the manager is going nowhere. “There have been more rumours of José Mourinho leaving Manchester United,” Mendes told the Telegraph. “It’s totally untrue. José is very happy at the club and the club is very happy with him. He has a long-term contract and is fully committed to building a solid winning project.”

United’s one major signing last summer was Fred, but Mourinho has said the midfielder will struggle for selection until the team tighten up. The Brazilian has featured in only one of the last seven games. “The day we are stronger defensively I think the horizons for Fred change,” Mourinho said.

Eric Bailly could be left out of the squad for today’s game at home to Fulham, along with Antonio Valencia. Bailly started against Arsenal on Wednesday, when Valencia was an unused substitute. Anthony Martial is a serious doubt to be fit as is Matteo Darmian.

Meanwhile, Jürgen Klopp has said Ben Mee did not intentionally injure Joe Gomez and the challenge that fractured the Liverpool defender’s leg was “the cleanest” committed by Burnley at Turf Moor.

Klopp and Sean Dyche were embroiled in an angry exchange following Liverpool’s 3-1 win on Wednesday, with the Burnley manager annoyed by criticism of his players’ tackling. The Liverpool manager asked referee Stuart Attwell to take action over challenges that he believes were rash, but accepted were not fouls.

That prompted Dyche to accuse Daniel Sturridge of cheating – “he is no cheat,” Klopp responded – but Liverpool’s manager sought to clarify his position and absolve Mee of blame for the injury that will sideline Gomez until the new year.

“I didn’t speak about that tackle, I spoke about these kind of tackles,” explained Klopp, who will also be without Dejan Lovren and probably Sadio Mané at Bournemouth on Saturday.

“I was a player who was late in his mind, so I had to judge a situation and I made a lot of sliding tackles in my career. Slide tackles are all different. It’s one thing to block the ball, you clear the ball without taking the player. It’s possible you can slide in, take the ball and everything is fine.

“The first one, Joe was close to the halfway line. If you tell me it’s necessary to go into a situation like that and Joe was already falling over, not because he wanted to, it happened. Then you saw the Bardsley challenge [on Alberto Moreno]. All of them endanger the other player a little bit.

“We all have a lot of respect for each other. For me, being aggressive is the readiness to hurt yourself and not the other player. I understand 100 per cent that Mee did not want to injure Joe. Maybe that was the cleanest tackle of all. I knew after the game it would be like this. If you say an opinion, you’ve got to be ready to accept that a lot of people see it differently.”

Liverpool have made the best start to a top-flight season in their history, yet find themselves trailing Manchester City by two points. Klopp insists the situation is not disheartening.

The Liverpool manager added: “How can you moan about that? The only job we have to do is collect as many points as we can, and then you have to see. We cannot do more. It is absolutely not a problem for us that we go in the dressing room and see the Manchester City result and they have won again. We expect them to win all the time, apart from the games against us. We have only to try to play the best season we can play, whatever that means.

“In this difficult period you have to focus completely on your own performance. You cannot play against two teams – the one on the other side of the pitch and the one in your mind. That doesn’t work. Whatever they get at the end of the season they probably deserve. It will be the same for us.” – Guardian