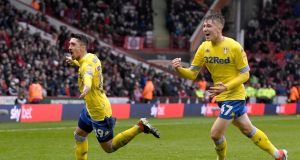 Pablo Hernandez took advantage of a late error from goalkeeper Dean Henderson as Leeds produced a big statement of intent with a 1-0 victory at promotion rivals Sheffield United.

Both sides had chances to score before Henderson’s costly mistake resulted in Hernandez scoring the winner in the 82nd minute.

Henderson passed straight to Jack Clarke and the substitute showed excellent composure to find an unmarked Hernandez in front of an open goal.

Leeds’ first win at Bramall Lane in 26 years moved them two points clear at the top of the Championship before the afternoon kick-offs.

George Baldock returned to the Blades side after illness and manager Chris Wilder also handed recalls to Billy Sharp and Mark Duffy.

Pontus Jansson took his place in the Leeds defence after recovering from a foot injury.

McGoldrick looked to get on the end of a low cross from Enda Stevens, but Adam Forshaw was on hand to beat him to the ball and snuff out the threat.

Chris Basham then failed to direct his header on target from a corner.

McGoldrick forced the first save of the match when his low drive saw Bailey Peacock-Farrell get down to his right to turn the ball wide.

Leeds head coach Marcelo Bielsa had to make a change in defence midway through the half when influential skipper Liam Cooper limped off, replaced by youngster Aapo Halme.

Halme was soon involved in the action, forcing a fine save from Henderson after a Barry Douglas free-kick posed problems for the home defence.

Leeds then won a free-kick in a dangerous position, but Hernandez saw his effort strike the defensive wall.

Sharp had a chance to score when he got on the end of a cross from McGoldrick, but with a couple of defenders close to him, he put his downward header off-target.

There was one change to the Leeds line-up for the start of the second half with Clarke coming on to replace Gjanni Alioski.

Douglas put a rising, long-range effort over the bar soon after the re-start before Henderson was called into action to save a low 20-yard shot from Clarke.

After evading several challenges, Mateusz Klich also tested Henderson with a low shot which was parried by the keeper.

The first change to the home line-up was made just after the hour-mark when Conor Washington was sent on in place of Duffy.

Peacock-Farrell came to his side’s rescue when he saved McGoldrick’s shot with his legs.

Stevens then fired a 30-yard strike just over after Washington and Baldock combined to set him up.

At the other end, Kemar Roofe put a near-post header a fraction wide after meeting a cross from Stuart Dallas.

Klich then tried his luck from distance but he failed to get the ball on target.

Leeds were gifted the only goal of the game eight minutes from time. Henderson tried to clip the ball on the left-hand side of his area and succeeded only in playing it straight to Clarke whose pass found Hernandez in the centre and the Spaniard fired into the unguarded net.

Hernandez also had a shot saved by Henderson late on.

As the home side threw men forward in a bid to force an equaliser, Washington was desperately unlucky to see his overhead kick come back off the bar.