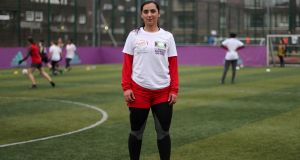 The Afghan government is investigating allegations that players on the women’s national soccer team were sexually and physically abused by male coaches and officials, including the head of the Afghan soccer federation, officials said on Tuesday.

President Ashraf Ghani said in a closed-door speech to the Afghanistan National Olympic Committee on Monday that he had ordered the investigation into the Afghanistan Football Federation in response to a report in the Guardian last week whose revelations he called “shocking to all Afghans”.

Fifa, the world body regulating international soccer, is conducting its own investigation. The scandal has prompted the team’s principal sponsor, the Danish sportswear company Hummel, to withdraw its support. “The documentation presented to us is not only an indication of gross misconduct and abuse of power by the AFF officials, it is in direct contrast to our values,” the company’s chief executive, Allan Vad Nielsen, said in a statement. “We have no other choice but to cancel the sponsorship.”

The accusations focus on Keramuddin Keram, the president of the Afghanistan Football Federation, which governs both men’s and women’s soccer, as well as other male officials from the federation. Khalida Popal, one of the original players on the women’s team and a longtime manager, said Keram had sexually harassed players in a bedroom in his office. She said that the bedroom had been rigged so that it could be opened only from the inside with his fingerprint scan, and that he trapped women there.

“The president of AFF and some trainers are raping and sexually harassing female players,” Popal said in a telephone interview on Tuesday. Popal fled Afghanistan in 2012 and obtained asylum in Denmark but has remained active with the national team, organising training camps abroad. When she organised a training camp in Jordan in February of this year, Popal said, she was shocked that the Afghan federation sent a male trainer and a male official to chaperone the team. One of the men got drunk and tried to force some of the women into having sex with him, including inside the women-only dormitory, and both of the men sexually harassed team members, Popal said.

When the players threatened to complain, Popal told the Guardian, Keram, a politically influential former governor of Panjshir province, beat one of them with a snooker cue, and threw her and eight other women off the team, alleging they were lesbians.

Hummel also focused on Keram. “Allegedly, the president was complicit in allowing the abuse to happen, and did not respond to the allegations put forward by the national team,” the company said. Popal said that when she learned in Jordan about the abuse of players, the victims were concerned about keeping everything quiet for fear that their parents would stop them from playing on the team. She said she had called Keram to tell him about the abuse.

“He promised that he would follow the issue and punish the abusive trainers,” she said. Instead, they were promoted to other federation jobs, she added. The Afghanistan Football Federation issued a statement calling the allegations “groundless” and saying it had “a zero-tolerance policy toward any type of such behaviour”. It said no one had ever brought such accusations to its attention. Keram did not respond to repeated requests for comment over four days. His chief of staff, Massoud Hassimi, said Keram was still the federation president and that only the main doors of the federation’s offices required fingerprint scans to open.

The head coach of the Afghan women’s team, Kelly Lindsey of the United States, expressed support for Popal and the players who have made the accusations. “Our Women have endured horrific Mental, Physical, and Sexual Abuse to play the sport they love for the country they love!” she wrote on Twitter.

Ghani did not announce any actions against the soccer federation and did not say if he believed the accusations. “Even if mere allegations cause our people to stop sending their sons and daughters to sports, we need to act immediately and comprehensively,” Ghani said.

Attorney General Mohammad Farid Hamidi promised to announce the results of his investigation within a week. “Rule of law and justice protects the rights and honour of athletes and families who send their sons and daughters to pursue a profession in sports,” Hamidi said. (Hamidi himself was criticised in a recent report by the Special Inspector General for Afghanistan Reconstruction, a US agency, which said he presided over an “unproductive, corrupt and patronage-laden office”.)

Fifa said it had long been aware of the allegations and was investigating them. “Fifa has a zero-tolerance policy on human rights violations and condemns all forms of gender-based violence,” the organisation said in a statement. “The serious subjects mentioned are being looked into by Fifa.”

Neither the Fifa statement nor Afghan officials addressed calls from players and Hummel for the Afghan federation or Keram to be suspended. “Once the facts are established, whatever remedial measures are needed will be taken,” a Fifa spokesman said.

Accusations of sexual abuse against male officials running women’s teams in Afghanistan are not new. In 2016, the head coach of the women’s national cycling team was accused by the team’s American founder and many of its members of repeatedly marrying and divorcing his riders, under duress, as well as other offences. The coach, Haji Abdul Sediq Seddiqi, was fired but never prosecuted.

The Afghan soccer federation claims to still have the backing of the women’s team. “It is grateful for the vocal support of its current female players, who have all published statements on the AFF Facebook page,” it said. There was only one such statement of support on that Facebook page, and it did not mention the sexual abuse charges. It was from a former captain of the team, Farkhunda Muhtaj. The most recent captain, Shabnam Mobarez, quit that post last month, complaining that she could not sign a contract with the federation because it deprived players of their rights – including the right to complain.

1 Ken Early: Handball ‘crisis’ a timely distraction from the grim bigger picture
2 Tour de France: Every yellow jersey winner must feel guilty by some association
3 49 and out for Corofin as their long Galway reign is ended
4 GAA Championships await and we need a button for the buzz of the crowd
5 Arctic conditions in Ballymena and snowflakes in Paris
Real news has value SUBSCRIBE
Crossword Get access to over 6,000 interactive crosswords