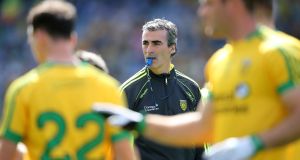 Jim McGuinness has been named head coach of USL side Charlotte Independence on a three-year contract. Photograph: Cathal Noonan/Inpho

The former Donegal senior football team manager Jim McGuinness has been appointed as head coach of the Charlotte Independence of the United Soccer League on a three-year contract.

He will take over the North Carolina club with immediate effect, ahead of the 2019 USL season. The appointment completes a unique conversion from coaching Gaelic football to soccer which began during McGuinness’s startling 2012 achievement when he coached his native county to its second ever All-Ireland title.

Six weeks after that success, he was offered a position as performance consultant at Glasgow Celtic when Neil Lennon was in charge at the club and he subsequently coached Celtic’s U-16, U-19 and U-20 sides. He stepped down from his position as Donegal manager after the All-Ireland final of 2014 and moved to Glasgow on a permanent basis.

In 2017, he joined the coaching staff of Roger Schmidt at Beijing Guoan in the Chinese Super league, gaining further experience there. This role, however, will be McGuinness’s first time taking charge of a professional soccer team and represents uncharted territory for a Gaelic games coach.

“That’s the challenge that’s in front of me,” he said on Thursday evening.

“I think I’ve learned a huge amount and tried to be studious in my application from the very first day I walked into Celtic from my experiences of all the managers I worked under.

“At the same time I was trying to build a picture in my own mind of how I saw the game and of how I would like the game to be whenever I became a manager. The other side of that coin is that if you leave the philosophical side of things out of it: football is about people and life is about people.”

The board at the Charlotte Independence were swayed by McGuinness’s track record as a coach and his exceptional win-ratio while with Donegal and are convinced he has acquired sufficient knowledge in the world of soccer to help their club progress. McGuinness says he is “proud of and grateful to” the club for placing its faith in him. One of the initial challenges will involved piecing together a back room staff and squad for 2019 season.

“You’ve got to have a clear vision and know what you want to achieve. But it is about getting the best people and that’s what I’m going to be focusing on: getting the right people and building the roster, as they say in inverted commas. In terms of the type of player and people you want. And I’m looking forward to that because it’s a luxury you don’t have in Gaelic football. You have the people in your community and they represent the county. So to be able to target players… I am looking forward to that.”

The Charlotte Independence joined the USL as an expansion team in 2014 and play in the Eastern Conference, which constitutes a 34 -game season. The club has announced plans to move into a new purpose-built stadium in the city ahead of the 2022 season. McGuinness will attend a press conference in Charlotte on Tuesday. His first game in charge will be on March 8th of next year.