Dubliner Gary Dicker dreaming of the title with Kilmarnock 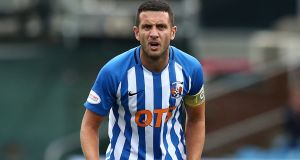 Two years after he realised his ambition of getting to play at Celtic Park, Gary Dicker returns there this Saturday with his sights set firmly on winning. And with Kilmarnock rather than their hosts currently top of the Scottish table, the 32-year-old Dubliner says the visitors believe they can do it.

“We’re the league leaders but obviously the pressure is on them,” he says. “If they’re not in front inside 20 or 30 minutes, the crowd will be getting on top of them and if we can keep it tight until then I think we’ll be in with a great chance of beating them,” he says. “We all do.”

Dicker laughs at the notion that he might feel in any way conflicted playing against a club he used to get along to watch as a supporter. He was in Seville for the Europa League final 15 years ago and remembers well the night in 2007 at the Glasgow ground when Milan goalkeeper Dida “let on he was dead,” after a confrontation with a fan who had run onto the pitch but, he says, “the way it is up here, there’s a lot of lads around who support either Celtic or Rangers and they want to beat them even more when they’re playing them.

“Coming up here, playing at Parkhead was definitely a box to tick for me. Now it’s about winning there. Hopefully I’ll sort it out this weekend.”

His first game there two years ago provided something of a lesson in the harsh realities of Scotland’s normal pecking order with Celtic winning 6-1 but Kilmarnock have been transformed in the 14 months since Steve Clarke, also a lifelong Celtic supporter, took charge and their recent record is hugely encouraging with two home wins and two away draws in the last four meetings between the two clubs.

“The gaffer has completely changed the mentality of the players going into these games,” he says. “It used to be that if you came away from a game against one of the Old Firm without being beaten 3-0, you were sort of happy enough but that’s gone now and I think during his time here we’ve picked up twice as many points as any other side in our games against the two of them. It’ll be a great atmosphere there, it always is, but we won’t fear them. We’ll be going out to win the game.”

They’ll be going there without another Irishman, Jack Byrne, whose return home was confirmed on Friday when he signed for Shamrock Rovers.

“Hopefully it will be really good for him, he’ll get to enjoy his football and it will give him the basis to get back over here again; he’s still only a young lad and he’s got unbelievable ability.

“People talk about him having an attitude problem but there wasn’t a hint of that here. He never gave the gaffer an ounce of trouble and he was popular in the dressing room.

“But football is the hardest job in the world when you are not playing. You are preparing Monday to Friday for something that you’re not a part of. I had a month out there between a ban and an international break and I was going up the walls. He was waiting for his chance but it’s always hard to get into a team that’s winning and so he was getting 10 or 15 minutes. I think once he’s playing regularly people will start see what he is really capable of.”

Dicker has been at the heart of his club’s strong run of form – just one defeat in the 10 games since they beat Celtic at home back in September. He has, he says, been helped himself by the bit of stability after a period that involved a lot of chopping and changing.

“When you’re moving clubs it’s hard,” he says. “You’re playing under different managers, with different players and it’s difficult to be at your best but I think since I’ve come here I’ve been the most consistent I’ve been, since I was at Brighton anyway.”

Clarke, though, has been key to his and the wider team’s remarkable run with Kilmarnock topping the table for the first time in 20 years and the only time with more than 10 games played since the season 53 years ago when they won their one and only title.

“The day he arrived he came in and said, ‘this is the way I look whether I’m happy or sad, so don’t read too much into it,” says Dicker of the famously dour looking former Chelsea defender. “So he’s got a dry sense of humour but he’s been great. He takes training every day and he makes things really simple with everything building towards the game on Saturday. He plays 4-4-2 when virtually nobody we play against does but there is a lot of flexibility within it. He doesn’t like losing and you can see how few goals we concede but then he wants lads to express themselves too and you can see that too in the goals we score and games we win.”

He has also, Dicker points out, achieved all of this with many of the players he inherited 14 months ago when Kilmarnock were eight games into the season but still without a victory.

Encouraged by the owners, Clarke has, it seems, helped to foster a slightly special spirit at the club and the whole squad spent Friday afternoon at a function for disabled supporters, mingling with a couple of hundred fans despite having such a big game to play on Saturday. “It was a really nice event,” says Dicker who admits the team’s place in the table certainly helped the mood.

The Dubliner says nobody is getting carried away with talk of the tile but does acknowledge that “anything can happen in football”. Just a couple of years ago, winning at Celtic might have been talked about in that sort of “Just imagine...” tone. These, though, are very different days for Dicker and co.

Devin Toner: it ‘means the world’ to be back in the Ireland side 15:27
Revitalised Chelsea bounce back with crucial win over Spurs 14:50
Matt Doherty urges for calm after Wolves’ ‘perfect night’ 12:46
Equestrian: Bertram Allen scores in Winter Festival 12:38
Crowning Glory: Three pivotal Ireland games at Twickenham 11:44

1 Keeping Donegal on the road to success a costly business
2 Tyson Fury weighs in three stone heavier than Deontay Wilder in Las Vegas
3 England v Ireland preview: Ireland’s revival to face its sternest test
4 ‘Manchester United are lucky to have you’: Klopp responds to Donegal schoolboy’s letter
5 TV View: Roy Keane but Daragh’s keener as Late Late fails to shoot the lights out
Real news has value SUBSCRIBE
Crossword Get access to over 6,000 interactive crosswords