Who is Ada Hegerberg? The first ever winner of the women’s Ballon d’Or 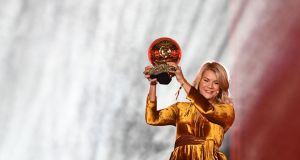 Monday night’s Ballon d’Or ceremony should have been a special night for women’s football. However, Ada Hegerberg’s moment - she was announced as the first ever winner of the women’s award - was overshadowed by French DJ and co-host Martin Solveig asking her if she could twerk. Yes, seriously.

But back to the football.

The Lyon striker received the award after scoring 53 goals for the club in 33 appearances last season and has 14 in as many games to date during the current campaign. Her 31 league goals made her the top scorer for a third year in a row in D1 Féminine, while her 15 goals in the Champions League set a new competition record. Beating her previous record of 14.

The Norwegian led her side to the Women’s Champions League title, scoring in extra time in the 4-1 win over Vfl Wolfsburg in the final. This was the club, and Hegerberg’s third straight triumph in the competition. The 23 year-old signed a new contract earlier this year that’ll keep her at the French club until 2021, an unprecedented length in the women’s game to recognise a rare talent.

“I would like to end this speech, with some words to young girls all over the world. Please believe in yourself.”

Aged only 16, she became the youngest player to ever score a hat-trick in the top division in Norway, playing for Kolbotn where she was joined by her elder sister. Andrine now plays for Paris Saint-Germain FC.

The following season she finished as the league’s top scorer and was voted as the league’s Young Player of the Year, still at only 16. Following a season at fellow Norwegian club Stabæk, the sisters joined German side Turbine Potsdam, before Ada left for Lyon.

She has also won 66 caps and scored 38 goals for Norway, and was awarded the Norwegian Gold Ball award in 2015 - making her the first woman to win the award for the season’s best Norwegian footballer in 20 years.

Nevertheless, she decided to take a break from international football in 2017, following long-standing frustrations over the state of women’s football both domestically in Norway and with the national team.

The Ballon d’Or has been awarded to a men’s player every year since 1956. It only took 62 years for the women’s game to receive equal recognition. Hopefully it won’t take as long for the award winners to be shown the same respect.

1 Dan Tuohy explains ‘rotten to the core’ comments
2 Six Nations: No place to hide for Ireland’s misfiring captain
3 Contepomi says Leinster can learn lessons from nature of Ireland’s defeat
4 England 24 Ireland 12: How the Irish players rated at Twickenham
5 Lampard warns Chelsea to be fully focused for Bayern test
Real news has value SUBSCRIBE
Crossword Get access to over 6,000 interactive crosswords