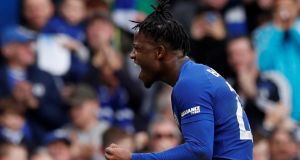 At the end of a routine day’s work Chelsea had safely navigated a passage into the fifth round of the FA Cup for the 18th time in 20 seasons and the crowd here were standing to acclaim Antonio Conte after one of those intermittent periods, such as is modern life at Stamford Bridge, when the manager’s job has come under scrutiny for the apparent crime of not having the Premier League title sown up already.

Chelsea’s supporters must know the drill by now, after all these years of Roman Abramovich rule, but this was about as comfortable as it gets for Conte’s men. Newcastle were obliging opponents and, if anything, it was just a surprise Chelsea did not add more goals to go with the two Michy Batshuayi scored before half-time and Marcos Alonso’s expertly taken free-kick during a prosaic second half when the away team played with a startling lack of self-belief.

For Newcastle, the cold, harsh reality is that it means the next time they play in this competition it will have been 50 years since the last time a trophy of any description carried their ribbons. The vast majority of Newcastle’s supporters would know about the 1969 Inter-Cities Fairs Cup only through the history books and their dissatisfaction could be heard in the form of several mutinous chants from the away end to remind the club’s owner, Mike Ashley, about his broken popularity. Those chants have become the soundtrack to Newcastle’s season and the large expanses of empty seats in that corner of the old Shed end told their own story. The early kick-off time will not have helped travel arrangements but it would be almost unthinkable, in happier times for Newcastle, to imagine this kind of diminished following for an FA Cup tie against the reigning Premier League champions.

The ones who did make it still managed to make a fair racket but the game took a familiar narrative bearing in mind Newcastle have managed only one point out of a possible 33 from their encounters with the top-10 sides this season.

It is 12 years since Newcastle last reached the fifth round and the latest disappointment cannot have been made any easier to bear by their inability to find out why Chelsea have found it heavy going recently. Conte’s men had won only two one of their previous seven fixtures since the turn of the year and one of those was in a penalty shoot-out against Norwich City in the previous round. Yet this was a breeze for the home side and Newcastle did not have the wit or gumption to affect its course.

Instead, an air of inevitability descended once Batshuayi had followed up his first goal, on the half-hour mark, by letting fly just before half-time and finding his luck was in as the ball spun off Jamaal Lascelles to arch over the goalkeeper Karl Darlow and fall into the exposed net. Lascelles was unfortunate after diving in to block the shot but it must have been alarming for Rafael Benítez to see how easily his team had been opened up, and the disruption in his back four.

At least there was a touch of refinement about the build-up to the first goal and, especially, the curling through ball Pedro put behind Newcastle’s defence to leave Eden Hazard with the chance to take on Chancel Mbemba. Hazard flicked the ball inside him to Alonso and the next touch fell invitingly for Batshuayi, six yards out, to fire in from the centre of goal.

It was a tepid response from Newcastle after the interval and there was not a single period of the second half when it felt as through Benítez’s players genuinely believed there could be any way back.

Alonso curled in the third goal, the game’s outstanding moment, from 25 yards and Conte made sure to substitute Hazard, N’Golo Kanté and Pedro throughout the remainder of the match, keeping them back for more challenging assignments.