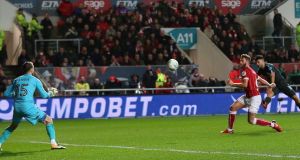 Manchester City remain on course to compete for silverware on four fronts and the first of those trophies is within touching distance. Pep Guardiola’s team will face Arsenal or Chelsea in the Carabao Cup final at Wembley on February 25th after Bristol City’s brave resistance was broken on a night when the Championship club’s splendid run to the semi-finals came to a memorable end.

Two goals either side of half-time from Leroy Sané and Sergio Agüero took the tie away from Lee Johnson’s team in a match where Manchester City were typically unforgiving. Bristol City will rue the way in which they contributed to their own downfall in the lead up to Sané’s goal, yet there was nothing they could do to prevent the second. Kevin de Bruyne produced another of those outstanding passes to set up Agüero for his 23rd goal of the season.

It says much for Bristol City that they refused to surrender, so much so they dramatically pulled back two goals through Marlon Pack and Aden Flint to set up an exciting finale. De Bruyne had the last word and converted with the last kick of the game.

Agüero’s injury-time header in the first leg had shifted the balance of this tie into Manchester City’s favour, especially with away goals only counting after extra time, but the home supporters had turned up daring to dream and determined to make themselves heard. Johnson had promised a “Champions League-type atmosphere” and it was that and more inside a stadium where every Bristol City fan arrived to find a flag on their seat.

The big question was whether the Championship team could deliver something special on the pitch and reprise the sort of performance that eliminated Manchester United at Ashton Gate. Manchester City were forewarned in that respect and there was no hint of complacency about the manner in which the Premier League leaders approached this second leg.

They won a corner within 12 seconds and attacked with relentless pace and intensity thereafter. They were utterly dominant in possession and on the few occasions Bristol City managed to seize the ball, Guardiola’s side won it back almost immediately by pressing high up the pitch. Agüero clipped the bar with a cross after only 12 minutes and John Stones came agonisingly close to getting his head to David Silva’s cross moments later.

Bristol City worked tirelessly to make life difficult for their opponents. Joe Bryan’s superb sliding tackle on Kyle Walker drew a huge roar of approval from the home fans and Hordur Magnusson did well to stop De Bruyne in his tracks as five Manchester City players set off on one of those devastating counter-attacks. Bobby Reid, who was so impressive in the first leg, won a free-kick in a dangerous area after Fernandinho cynically fouled the striker to prevent him from getting away but that was a rare Bristol City attack.

The majority of the game was played in Bristol City’s half and it felt like a question of how long they could weather the storm. David Silva, sprinting around the outside of Sané, saw his low shot from an acute angle brilliantly clawed away by Luke Steele, who was drafted into the team in place of the injured Frankie Fielding.

Guardiola had made only two changes from the side who started against Newcastle on Saturday and there was a sense of inevitability that their superior quality would eventually tell. The frustration for Bristol City was not only that they got so close to half-time without conceding but also that they were guilty of gifting Guardiola’s side the lead.

Magnusson, who struggled at left back and was replaced at half-time, was caught trying to shepherd the ball out of play inside his own penalty area and close to the touchline. Bernardo Silva picked his pocket and when the ball ran loose to Sané there was only going to be one outcome as the German struck a low shot that took a deflection as it flashed past Steele.

Liam Walsh was also withdrawn at the interval as Johnson introduced another striker in the form of Famara Diedhiou to try to find a way back into the game, yet within four minutes of the restart the task had become even harder for Bristol City. De Bruyne, with time and space to pick a pass, produced a lovely ball for Agüero to scamper clear in the inside right channel.

There was still much for Agüero to do and not a great deal of the goal to hit but the striker took the shot early and exquisitely whipped the ball beyond Steele and into the far corner.

It was a goal that should have deflated Bristol City, yet they refused to go quietly and their perseverance was rewarded. Although Manchester City’s defending in the build-up left much to be desired, it was a terrific towering header that Pack nodded beyond Bravo from Jamie Paterson’s looping cross. Flint then tapped in to briefly reignite Bristol City’s hopes only for De Bruyne to complete the job. – Guardian service