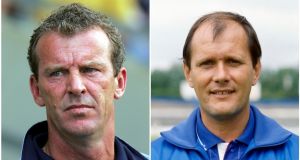 This article contains content some readers may find offensive

Another four former Chelsea academy players are set to take legal action against the club over racist abuse they allege they were subjected to by the coaches Graham Rix and Gwyn Williams.

One player claimed he had been left so scarred by taunting he received during his time at Chelsea as a young teenager that he felt unable to eat a banana publicly during his first job outside football.

The players, who prefer to remain anonymous, have decided to come forward after reading claims reported in the Guardian by three of their contemporaries. Their stories also concern Rix, then the youth team coach, and Williams, who held a number of roles at Stamford Bridge for more than 25 years. They both deny wrongdoing.

Rix and Williams were key members of the Chelsea backroom staff during the 1990s. The players, who are black, claim the abuse was relentless and that there was no attempt to conceal the alleged racism in the academy, although they suspect language was tempered around some senior players.

“I got scouted by Gwyn Williams for Chelsea,” one player said. “It wasn’t immediately apparent because when he scouted me he knew I was being looked at by a couple of other clubs and he was the nicest person in the world. I grew up as one of five in Hounslow and had never experienced racism before. But when I started training at Chelsea that’s when I started to hear the words he would use all the time: nig nog, black bastard, coon.

“We got all sorts of abuse in the showers. I remember at the old Stamford Bridge we used to get it all in the changing rooms. You would hear: ‘Look at his big black cock, donkey dick.’ There was a group of apprentices who were two or three years older than me who got it really bad.”

Chelsea have launched an independent inquiry into the allegations of racism and the Football Association’s safeguarding team are in the process of interviewing the players. But the abuse has taken an emotional toll on the alleged victims with some questioning whether the discrimination played its part in their careers in football being curtailed.

“At the time you don’t say anything because they have your dreams in their hands and you don’t want to do anything to affect that,” said one player. “But it has long-lasting effects.

“When I got my first job outside football I was afraid to eat a banana in the office, because when we used to eat fruit at half-time or after a game, pick up a banana, you can imagine what it was like in the changing room as a 12-, 13-, 14-year-old. That sticks with you. I remember walking into this office as a young black kid and thinking: ‘I can’t sit here and eat a banana because somebody’s going to call me an effing nigger or a monkey.’ It wasn’t like that at all but that’s how it felt for the first few years.”

The solicitor acting for Rix and Williams, Eddie Johns, said: “My clients have no comments on these unattributed quotes. For the record my clients deny any allegations of any form of abuse by them toward youth-team players at Chelsea.”

A Chelsea spokesman said: “We take allegations of this nature extremely seriously. We are absolutely determined to do the right thing, to assist the authorities and any investigations and to fully support those affected which would include counselling for any former player that may need it.” – Guardian service

3 All in the Game: Glowing tributes few and far between for departing Özil