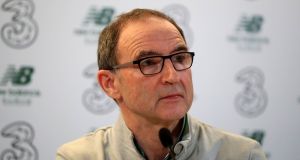 Martin O’Neill has signed a new contract and will remain as republic of Ireland manager until 2020. Photograph: Niall Carson/PA Wire

Martin O’Neill has signed a two-year extension to his contract and will remain as Republic of Ireland manager until 2020.

The Football Association of Ireland made the announcement through their Twitter account at 8pm and also confirmed that assistant manager Roy Keane and the rest of O’Neill’s management team will stay on until 2020.

FAI chief executive John Delaney said last week that O’Neill would sign the new deal ahead of Wednesday’s Nations League draw, with legal teams looking from both sides looking over the contract earlier in the week.

Delaney said that O’Neill needed some time to consider his position as Ireland manager in the wake of the heavy playoff defeat by Denmark. Having weighed up the alternative offered by Stoke City at the weekend and decided against taking it, the 65 year-old confirmed his intention to sign the new deal.

“After the Denmark game, which was a blow, he’ll tell you that himself, he took time out himself to see if he wanted to stay with the Republic of Ireland,” said Delaney.

“It’s understandable. This is not Premier League football where you have to appoint a manager within a week. Our next game is Turkey at the end of March and he took some time. He came in, there were obviously some conversations in between that and he came in last night and told me and Michael Cody [the association’s secretary] he wanted to stay and he will sign his contract prior to the Nations League draw. That’s what’s going to happen.”