Michael Walker: A new or false dawn at the Stadium of Light? 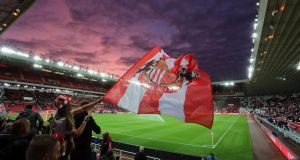 This season is Sunderland’s second season in the third division

You could tell how things were going by the the song being sung. From behind his goal Sunderland fans were serenading Jon McLaughlin. An hour had gone, Sunderland were winning 1-0, but the chanting of their goalkeeper’s name told of the game’s direction. McLaughlin was increasingly busy and, sure enough, five minutes later Rotherham United equalised.

A talented winger on loan from Rangers called Jake Hastie supplied the emphatic finish. One of his colleagues slipped over during Rotherham’s celebration, causing some amusement in the East Stand. But there were few smiles after that.

It would be an exaggeration to say the visitors took control, but Rotherham had been the better side for the previous 20 minutes and remained so for the rest of an energetic game. Locals could lament Aiden McGeady’s missed penalty in the first half at 1-0, but a 1-1 draw was fair.

It left Sunderland fourth in the table, four points off leaders Coventry City with a game in hand. It’s hardly a desperate situation.

There were 29,000 there on a Tuesday night, 1,000 from south Yorkshire. The Stadium of Light looked impressive beneath a mackerel sky, and there was a hum of positivity on the concourse at Porterfield’s Bar. Sunderland were ahead in less than a minute and even the latecomers who missed the goal were smiling. It was all happy, clappy; it was Netflix.

Then you saw Rotherham, a Championship side last season, looking more like one than their hosts. You recall that Leeds United were in this division for three seasons before getting out in 2010, Nottingham Forest the same a few years earlier. High-flying Sheffield United spent the six years to 2017 trying to shoehorn themselves out.

There is an expectation at a club of Sunderland’s scale that promotion will be won next May. But they felt that in Leeds, in Nottingham and Sheffield and on Wearside they felt it this time last year. The team, however, drew so many matches 1-1 (15 in all) that it ended up fifth in this so-called League One. It was the lowest placing in the club’s 140-year history. The players then experienced the smack of a play-off defeat by Charlton.

Some thought the season a success regardless. There was a better feeling around the club. Some claimed it was reborn.

Others made judgments based on budgets, achievements, results. They did not think the club was reborn, just different, the fifth best team in the third division.

This season began, funnily enough, with two 1-1 draws, and Tuesday brought a third. It is a discomforting pattern, and there was some grumbling. There was also silence, a sense of limbo.

In the hours before kick-off Tuesday had seemed like a landmark day. Sunderland are in the throes of a takeover and there was movement.

Last month, to raised eyebrows and quickening pulses, it was revealed the club was in talks with American investors. Three names came forth – Glenn Fuhrman, John Phelan and Rob Platek – and their company is MSD Capital.

On Tuesday it became public that a new business – FPP Sunderland Limited – has been registered at Companies House and its address is the Stadium of Light. Fuhrman, Phelan, Platek, presumably.

This suggested the Americans’ due diligence, which has been thorough, was completed. Sunderland, as fans sing, were on their way.

Those supporters apparently had a persuasive effect on the American trio via the Netflix series Sunderland Til I Die, a programme simultaneously showcasing Sunderland’s passion, potential and pathos. Hopefully someone pointed out to them that fans from Cardiff to Portsmouth to Barnsley also sing Til I Die, just in a different town.

Yet FPP’s imminent arrival means this is surely the end of one cycle, downwards, and the beginning of another, upwards. And if part of football is dreaming, Sunderland fans can begin to dream. Just as there was “SundIreland”, already there is “SunDELLand”. You can buy the T-shirt.

Sunderland have had dreams before. Some of them were good – Niall Quinn, Roy Keane, Jermaine Defoe’s volley. But quite a lot turned out otherwise. Jack Rodwell on £73,000 per week. Ricky Alvarez. Paolo Di Canio.

Plus it turns out FPP are separate from Dell in this instance. Their ability to invest will also be restricted by FFP, Financial Fair Play.

So this is not a Jack Walker makeover and “sustainable” was the word manager Jack Ross chose on Thursday when commenting on discussions with the prospective owners. Ross has been at the club 16 months, though it may feel longer. (Ross has his critics.)

This will be the club’s fourth takeover in 13 years. Back in the early autumn of 2006, when Sunderland were bottom of the Championship, Ireland’s Drumaville men bought the club from Bob Murray. Quinn was chairman, Keane was manager and Sunderland went boom. (Keane has his advocates.)

Then the Celtic Tiger ran out of legs, Ellis Short bought out Drumaville and began to pump in million after misguided million. It worked in that Sunderland stayed in the Premier League for a decade; it didn’t work in that Short got through 11 managers, the club suffered back-to-back relegations, embarrassment, strife and left Short so cold he sold in desperation to Stewart Donald last May.

The businessman from Oxford is wealthy, but he is not football rich. Sunderland needed more than what he had from the moment he walked in the door. Two months ago, at a supporters’ forum, Donald said: “In August we need £3 or £4 million,” adding “and I can do that”. What else he can do is in question.

August was said to be the month when Sunderland’s legacy transfer debts were to be addressed again. It was estimated they needed £16 million, which coincidentally was the same sum as their final parachute payment.

This is where the Americans step in. How much financial wriggle room FPP have is the next unknown. Another is how much they wish to invest. “Sustainable” is an interesting word. It is not, for example, “transformational”.

The 4,000 fans making the trip to Bolton on Saturday will debate this. There should be a comfortable victory to enjoy. It would enhance the feeling that Sunderland are on the cusp, a phrase that always sounds exciting. A winning team, new owners, fresh investment: it’s ready to go.

Then you think of Tuesday night, see that the last game of the season is at Rotherham, and wonder whether Sunderland really will be soon in a different league.