Pochettino angry at players who didn’t ‘respect the plan’ 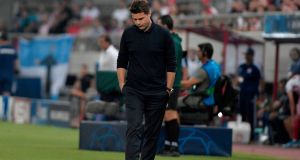 Mauricio Pochettino accused his Tottenham players of lacking fight in the 2-2 Champions League draw at Olympiakos and suggested that they needed to work harder on the psychological side of their game.

Spurs started badly at the raucous Karaiskakis Stadium only to fashion a 2-0 lead against the run of play – courtesy of Harry Kane’s penalty and a rasping drive from Lucas Moura.

But as they had done at Arsenal in the Premier League at the beginning of the month, conceded for 2-1 just before half-time – a body blow to their psyche – and then shipped an equaliser after the interval. After the match, Pochettino did not hold back with his criticism.

“I feel very disappointed,” the manager said. “In the first half, I wasn’t happy with the performance. From the beginning we had a plan, and we didn’t respect the plan. That’s what disappointed me the most. I told them at half-time. We scored two good goals but if you analyse the performance only, it wasn’t great.

“We conceded a lot of chances and the way we conceded the first goal was so painful. We didn’t translate from Saturday [in the 4-0 home win over Crystal Palace] the aggressivity that is needed in these games. We were a little bit better in the second half, but conceded a very soft penalty.”

Pochettino was asked about the similarities to the Arsenal game. “It’s easy to explain. When we don’t show the intensity that the competition demands, we struggle. We are not talking about the quality of players. We are talking about focus, concentration, anticipation. How many times did we anticipate the action? How many times were we not productive like we were against Palace?

“It’s not about tactics or quality players but the level of fight. You need to match the opponent in aggressivity, excitement, motivation. That is the first demand – you need to work. It’s not only the responsibility of one person; it’s everyone’s responsibility.

“It is not possible how we started tonight and it is a massive difference to Saturday. It’s a massive disappointment. We can talk about scoring twice and playing better second half, but this season we are conceding a lot of chances and a lot of goals. We need to change that. The only way is to be more demanding. Training needs to be harder. Psychologically harder.” – Guardian