Lampard: Chelsea have ground to make up after Valencia loss

Home side rueed missed penalty as Valencia struck late on 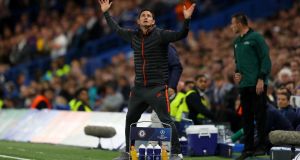 Frank Lampard admitted that his young Chelsea side were given a harsh lesson after opening their Champions League campaign with a 1-0 defeat against Valencia at Stamford Bridge but insisted Ross Barkley was the designated penalty taker after the England midfielder missed the opportunity to equalise from the spot late on.

It was a frustrating night for Chelsea, whose hopes of making it out of Group H are already in doubt. Mason Mount could miss Sunday’s home game against Liverpool after limping off with an ankle injury and Lampard admitted that his team paid for their lack of ruthlessness.

“I think we created enough in the game,” said the Chelsea manager. “Not lots of fantastic chances, but good chances. Obviously a penalty and we conceded from the one shot on target, so it was a harsh lesson in Champions League football – a game we played pretty well in and we lose it. The good news is we have five games left in the group.”

Chelsea, who were caught out when Rodrigo fired Valencia ahead in the 74th minute, are likely to need positive results when they visit Lille on October 2nd and Ajax on October 22nd.

“That’s the reality of losing a game at home,” Lampard said. “It makes those games more important, particularly as they come back to back away from home. There are league games in the meantime, but we need a strong focus on those games to try to get a result in one of those two games before we make it really tough for ourselves.”

There was confusion when Barkley, who came on for Mateo Kovacic in the second half, appeared to have a debate with Willian and Jorginho about who should take Chelsea’s penalty in the 87th minute after a handball. However Lampard said he was following instructions from the coaching staff.

“Ross is the penalty taker,” Lampard said. “He was in pre-season and scored a couple. He has been when he started. He was when he came on today and he missed it. That is the clear story. I don’t know what the conversation was, but Jorginho and Willian were the takers on the pitch. When Ross comes on he becomes the penalty taker.”

Chelsea are also sweating on Mount’s fitness after the midfielder went off in the 16th minute following a challenge from Francis Coquelin.

“We don’t know how bad it is,” Lampard said. “We are going to have to assess it in the next 24 to 48 hours to see the scale of the injury. It’s too soon to say. Obviously it was a shame because he was playing so well and started well.”

Lampard also condemned the minority of Chelsea fans who reportedly sang offensive chants about Jews and the travelling community during the first half.

“I didn’t hear them, but it’s the same message I’ve said quite a few times this season. As a club we have initiatives and we are very clear where we stand on racist chants at this ground or any other ground. I will reiterate that clearly.” – Guardian