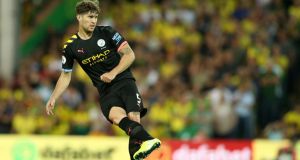 John Stones has been ruled out for at least a month with a muscle injury. Photograph: Paul Harding/Getty

John Stones will be out for up to six weeks with a thigh injury that leaves Nicolás Otamendi as Manchester City’s only available frontline centre-back.

With Aymeric Laporte out until February and Vincent Kompany having left in summer, Pep Guardiola was careful to strike a bullish note regarding Stones’s injury, which was sustained during training for Wednesday’s Champions League game against Shakhtar Donetsk in Kharkiv.

“John got injured making a pass,” City’s manager said. “[Now] it’s a big challenge. For me as a manager it is an incredible challenge. We’ve got just one [recognised] central defender in Nico but I believe a lot in something people don’t know, which is the spirit and commitment, and everyone must make a step forward to solve this problem we have.”

Guardiola intends to use the midfielder Fernandinho alongside Otamendi, with the teenagers Taylor Harwood-Bellis and Eric García the back-up options. “We will go with them for the next few months,” Guardiola said. “It is what it is; sometimes these situations happen. It has happened and what we are not going to do is complain.”

He said he was relishing the test of his coaching. “I like it, to prove myself and show we are able to find a solution for the team, to make an incredible step forward and find a solution to this problem that we have.”

Harwood-Bellis is a 17-year-old who has yet to make his debut, and the 18-year-old García’s first-team experience consists of three English League Cup games. Guardiola moved Javier Mascherano from midfield to central defence with notable success while manager of Barcelona and is confident Fernandinho can fill in well for City.

“We don’t have many other options,” said Guardiola, who explained why the Brazilian has played only 53 minutes his season – when replacing Laporte in the 4-0 win against Brighton & Hove Albion at the end of last month.

“He arrived back late [just before the season started] and he’s 34 years old – that’s why he hasn’t played longer. He trained last week in the international break and it went well. With the experience he has [and his profile as] a teammate and his personality, of course he can play in that position.

“Sometimes for tactical reasons he played there last season and now with him, Taylor Bellis, Eric and Nico, we are going to play them in that position. It’s not a problem, it is a challenge; they will do it, no problem. My players are the best – we will work out with the players we have how to create something. That’s what it is.

“Football is not how you handle the good situations, it is how you handle the bad ones. This team has done that in the past: we have won seven titles, nobody gave us anything, we won them for ourselves, so that’s what it is. The ideal situation does not exist in football. It how you approach the challenge and I am ready for the challenge. I like it, I like to love this situation.”

City start their Champions League campaign against Shakhtar at Kharkiv’s Metalist Stadium. This is the third consecutive year City have faced Donetsk in the group phase and Guardiola has also managed Barcelona and Bayern Munich against the Ukrainian champions. “It’s always good to be here. I bought an apartment,” he said, joking.

The midfielder Phil Foden has not travelled because of illness. - Guardian