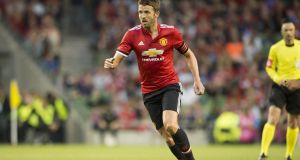 Manchester United captain Michael Carrick has undergone a procedure to treat an irregular heart rhythm and hopes to make a swift return to action.

Carrick revealed he had felt something was wrong during his only outing of the season — a 4-1 EFL Cup victory over Burton in September — and underwent tests to determine the problem.

Having had a cardiac ablation to correct the problem, the 36-year-old says he is now “healthy” and focused on making his comeback for United.

He wrote in a statement posted on Twitter: “I just want to clear up my situation as I’ve had quite a few people asking if I’m ok and why I haven’t been fit over the last couple of months.

“After feeling strange during the second half of the Burton game in September I underwent a series of tests. It turned out to be an irregular heart rhythm which has been fully investigated and I had a procedure called a Cardiac Ablation.

“I had to build up training steadily whilst being monitored closely but I feel fine now.

“I would like to reassure everyone that I’m healthy and back training hard with the team. I’m building up my fitness and aiming to be back in contention for selection soon.”

The British Heart Foundation describes ablation as using either heat or freezing on the areas of the heart that cause an abnormal heart rhythm.

BHF adds on its website: “This treatment creates scar tissue which breaks abnormal circuits in the heart (and) destroys areas of the heart muscle which are triggering arrhythmias.”

Carrick has been a key presence at the centre of United’s midfield for over a decade, having joined from Tottenham on an #18million deal in the summer of 2006.

He has made more than 400 appearances for the Red Devils and his trophy haul includes five Premier League crowns and an FA Cup and Champions League triumph apiece.

After he signed a one-year deal in May to extend his stay at Old Trafford until the end of this campaign, United manager Jose Mourinho labelled the veteran as “one of the true professionals of the game”.

Carrick made 38 appearances including 18 Premier League starts last season and was made club captain over the summer following the departure of Wayne Rooney to Everton.

“We wish Michael well and look forward to seeing him back on the pitch soon,” the club said.

All you need to know about a cardiac ablation

What is a cardiac ablation?

Also known as a catheter ablation, it is a drug-free procedure where tubes are passed through blood vessels into the heart. The area causing the problem can be found and then “destroyed using either heat (radiofrequency ablation) or by freezing (cryoablation)”. This “creates scar tissue which breaks abnormal circuits and destroys area of the heart muscle which are triggering it”, according to the BHF.

How long does it take?

It can take from anywhere between 15 minutes and four hours.

How quickly does it work?

The BHF says it “doesn’t usually work immediately” but that after “8-10 weeks it’ll be clear if it’s worked or not”. In his statement, Carrick referred to discovering the problem in the wake of the game against Burton on September 20 — eight weeks ago.

According to the BHF there is a “very small amount of risk” but that a doctor would only recommend the procedure if “the benefits outweigh the risk”. In a worst-case scenario, the BHF says, a pacemaker may be fitted.

What next for Carrick?

He says he is “healthy and training hard with the team”, meaning that any worst-case fears will have been allayed, especially given United will have access to specialist medical advice. He says he is “building up fitness and aiming to be in contention soon”.