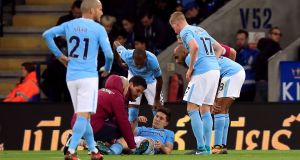 Pep Guardiola believes the loss of John Stones will present Manchester City with a tough examination of their title credentials. Stones, whose outstanding form saw him play back-to-back 90-minute games for England against Germany and Brazil, now faces six weeks out with the hamstring injury sustained in the win at Leicester on Saturday.

The return of the captain, Vincent Kompany, after his own lay-off is timely but, given the Belgian’s patchy fitness record, the Premier League leaders do appear short of cover in central defence. Nicolás Otamendi is back after a one-game domestic ban, but the only other specialist options are Eliaquim Mangala and largely untried youngster Tosin Adarabioyo.

“We don’t have a big squad,” Guardiola said before Tuesday’s Champions League game at home against Feyenoord. “It is a big pity we lost a month and a half of Vincent Kompany and now John Stones. To win the titles we need all the squad, especially important players like John and Vinny.

“On the other side, we have an opportunity. We have to play 12 games in a short space of time with only three central defenders. One of them is a risk, in Vincent only just back. It is not easy but I want to see how we react. Always when you are champions you have to handle the big situations, the tough situations.

“When everyone is ready and comfortable, that is not when you get credit. We are going to see how we react in the most important moment of the season. Until [City play] Watford, on January 2nd, it is about how we react.”

Mangala, who spent last season on loan at Valencia, looked set to leave in the summer, but City’s failure to sign Jonny Evans from West Bromwich Albion earned him a reprieve. He came on for Stones at Leicester. The 26-year-old, sitting alongside Guardiola at his press conference, said: “Football is like this. You have to be ready to take the opportunity. We need more than 11 players. Every player has to be ready to play.”

Guardiola admits deciding which of his strikers, Sergio Agüero or Gabriel Jesus, should play is an even harder call. He said: “Now it is the toughest decision because both with their different qualities and they deserve to play. They have a lot of games and they have to be ready and prepare well.”

Guardiola added that he had not played both together recently, as he did earlier in the season, because injury to the left-back Benjamin Mendy had increased reliance on the winger Leroy Sané.

City have secured a place in the Champions League last 16, so the pressure is off for Feyenoord’s visit, but Guardiola said: “I prepare the same way as always and that’s to win the game.”