All of the weekend’s Premier League team news

No Ibrahimovic from the start for United; Danny Rose likely to be dropped again 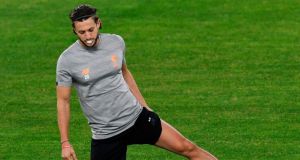 Adam Lallana could make a return to action for Liverpool in their Premier League clash with Chelsea. Photo: Cristina Quicler/EPA

Saturday (3pm kick off unless stated)

Christian Benteke is pushing to start for Palace after returning as a substitute in the 2-2 draw with Everton. The striker’s availability increases competition for places in the final third, where manager Roy Hodgson has so far persisted with the in-form Andros Townsend and Wilfried Zaha. Palace’s only absentees are Lee Chung-yong (ankle) and Connor Wickham, who is far from a return after injuring the anterior cruciate ligaments in his right knee.

Stoke may rest Xherdan Shaqiri for the trip to Selhurst Park — Shaqiri came off with a tight hamstring at Brighton and boss Mark Hughes is tempted to give him a chance to fully recover. Geoff Cameron (concussion) and Jack Butland (finger) have not yet resumed training.

United are again without Eric Bailly and Phil Jones. Marcos Rojo played the entirety of the midweek Champions League trip to Basel after 216 days out following a serious knee injury and the defender’s match-fitness will be assessed ahead of the game. Zlatan Ibrahimovic is not yet ready to start, while captain Michael Carrick remains sidelined. Ashley Young, Juan Mata and Antonio Valencia did not travel to the Champions League clash.

Brighton manager Chris Hughton reported no fresh injury problems ahead of the trip to Old Trafford. Israel midfielder Beram Kayal, who suffered a broken leg in the final pre-season match against Atletico Madrid, is set to travel with the squad. Midfielder Steve Sidwell, though, continues his recovery from a back problem.

Midfielder Mikel Merino will return to the Newcastle squad after missing the last three games with a back injury and his availability provides manager Rafael Benitez with a timely boost as Isaac Hayden is suspended. Full-back Paul Dummett is closing in on a return from his long-standing hamstring injury but the game will come too soon for him, while central defender Jamaal Lascelles (foot) and winger Christian Atsu (groin) are still out.

England striker Tammy Abraham is a major doubt. He was forced off at Burnley last weekend with a back problem and Swansea must wait to see how he responds to treatment. Wilfried Bony stands by to make his first start since the end of September, while player-coach Leon Britton has a niggling groin injury.

Bournemouth striker Jermain Defoe will miss the match because of a calf problem. Captain Simon Francis is suspended after his red card in last week’s win over Huddersfield, while midfielder Junior Stanislas remains sidelined by a groin injury. Defenders Brad Smith (hip) and Tyrone Mings (back) continue their rehabilitation.

Danny Rose is set to drop out of the Spurs starting line-up after playing 90 minutes against Borussia Dortmund on Tuesday, with Ben Davies likely to come back in. Kieran Trippier could replace Serge Aurier on the right but Toby Alderweireld (hamstring) and Victor Wanyama (knee) are out and Erik Lamela is still regaining match sharpness.

Midfielder Adam Lallana, yet to play a competitive match this season, has been stepping up his recovery from a thigh injury and could be involved this time. Central defender Joel Matip (knock) may make his return to action after missing the last two games but midfielder Emre Can is a doubt due to a muscle problem.

Former Liverpool loanee Victor Moses is available for the Blues after a hamstring injury. Alvaro Morata and Andreas Christensen are expected to return in place of Willian and David Luiz as boss Antonio Conte rotates his options, with striker Michy Batshuayi (ankle), forward Charly Musonda (knee) and the left-sided Kenedy (undisclosed) out.

Saints manager Mauricio Pellegrino faces a potential problem in central midfield unless Mario Lemina is passed fit to start. The 24-year-old has been struggling with an ankle injury and will be assessed before Pellegrino picks his team. Fellow central midfielder Oriol Romeu is suspended, while Matt Targett is absent with a leg injury.

Everton striker Oumar Niasse misses the game — the first Premier League player to serve a suspension for diving. Caretaker manager David Unsworth will make sweeping changes to the side humbled 5-1 by Atalanta on Thursday. Tom Davies is suspended and there are questions over Phil Jagielka (groin) and Morgan Schneiderlin (toe).

Striker Chris Wood is set to return to the Burnley starting line-up at the expense of Ashley Barnes. Jon Walters and Dean Marney are making steady progress with knee injuries but are not ready to figure, while goalkeeper Tom Heaton is still out after his shoulder operation.

Arsene Wenger made 11 changes for Arsenal’s Europa League defeat at Cologne but his side at Turf Moor will likely resemble that which beat Tottenham last weekend. Santi Cazorla (ankle) is the only absentee, with Danny Welbeck in contention despite coming off at half-time in Germany having recovered from a recent groin problem.

Huddersfield centre-back Christopher Schindler returns from suspension, while Jonathan Hogg is back having missing the Bournemouth defeat due to the birth of his son. Kasey Palmer (hamstring) is back in full training, but Philip Billing (ankle), Michael Hefele (Achilles) and Jon Gorenc Stankovic (knee) remain out.

City are set to welcome back captain Vincent Kompany and winger Leroy Sane, who were rested for the midweek Champions League tie. Left-back Fabian Delph, playmaker David Silva and midfielder Fernandinho may also return after being unused substitutes against Feyenoord but John Stones (hamstring) and Benjamin Mendy (knee) are out.