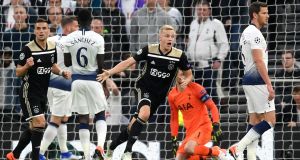 Donny van de Beek is unlikely to forget the night of July 26th 2017. Aged 20 and still living with his parents in the small town of Nijkerkerveen, he scored a clever goal for Ajax in a Champions League qualifier at Nice. It had the feel of a breakthrough moment.

That equaliser in a 1-1 draw left Ajax on course for the group stage and the midfielder wore a serious look as he reflected on the outcome. “Important,” he said, though he had more important matters on his mind.

Van de Beek’s internal struggles had not been apparent. After the goal he exerted increasing control, especially when Frenkie de Jong joined him in midfield. Van de Beek showed strength, stamina and the ability not only to score but also prevent goals. De Jong injected speed, manoeuvrability, surprising turns and risky solutions.

The pair were regarded as the future of Ajax. Now both are at bigger clubs. A year ago De Jong joined Barcelona; on Wednesday Van de Beek moved to Manchester United.

Van de Beek had wanted his best friend alongside him in Nice, starting too. But that friend, Abdelhak “Appie” Nouri, had suffered heart failure leading to irreparable brain damage three weeks earlier during a friendly in Austria.

Van de Beek and Nouri shared countless titles in Ajax’s academy. Together they were Ajax ballboys and would beg for shirts or gloves. They squeezed each other’s arms when allowed to go with the first team to a training camp in Qatar aged 17.

Out there, they praised each other. “I always call him ‘Maradonny’,” Nouri said. “At first I didn’t know he was that technically skilled. But he is also always there during transition when we lose the ball, even when he is tired.”

Van de Beek said: “People are crazy about Appie. Because he does exciting things, makes fun of opponents, but efficiency-wise he is also good.”

All Ajax’s players suffered because of the tragedy, but all said Van de Beek suffered most. He and Nouri had waited patiently, staying in the youth team rather than going on loan. Ajax recognised their potential and created space by shedding more experienced midfielders.

After Van de Beek scored in Nice he made a three and a four with his fingers; 34 was Nouri’s shirt number. Swallowing his tears he said: “It came from my heart. I always want to score but tonight even more. For Appie and his family.”

Though Van de Beek scored and impressed again at home to Nice, with Nouri’s father and brother in the stands, Ajax lost the tie and stumbled through the rest of the campaign.

Rejuvenation came the following season. Ajax won a 34th championship – note the number – the Dutch Cup and enjoyed an unimaginable Champions League journey. Van de Beek kept improving and playing more important parts with impressive runs, Nouri-esque backheels and immaculate goals against Juventus in the quarter-finals and Spurs in a semi-final lost in the last seconds.

Ajax players were the hottest products on the market. De Jong went to Barcelona for €75m and Matthijs de Ligt to Juventus for €85m. Van de Beek was close to signing for Real Madrid, but this summer they did not push for him.

How come? Maybe Van de Beek lacks star appeal. In some ways he is still the caring, obedient child who loved to climb on the chicken coop in the garden with clogs on. He was never one to brag; on the contrary.

Aged 10 he had wanted to go to Vitesse instead of Ajax, where he felt a bit lost among bolder children from urban areas during a first trial, but a love of the club – imparted by his father – changed his mind. He treasured the signatures of Rafael van der Vaart and Wesley Sneijder on his Ajax drum.

When he played for Ajax’s academy, he quickly put away his club gear in Nijkerkerveen. The Mercedes was parked and exchanged for the van of his father, André. Only recently did Van de Beek change his hairstyle, a hip blond cut replacing the boyish crest.

Van de Beek left the tricks, clever passes and other fireworks to teammates such as Nouri and, later, Hakim Ziyech and tried to complement their style. Even now, still mainly a substitute for the Netherlands, he is not a galáctico of an attacking midfielder.

United, possibly pushed by Tottenham interest, have spent an initial £34.7m on him. Ajax took a reasonable attitude in negotiations, as agreed with Van de Beek a year ago.

There are doubts whether he will flourish. He has to compete with Bruno Fernandes while somewhat similar players such as Siem de Jong and Davy Klaassen left Ajax as captains but failed to make an impact at Newcastle and Everton, partly because of injuries.

On the other hand, Van de Beek has shown he is good enough to play a dynamic, leading role in the final phase of the Champions League. He does not have a jet-set lifestyle, tattoos, piercings or big beard, but he has been hardened by tragedy.

Van de Beek will wear the No 34 shirt, though typically only after calling the Nouri family for their approval. Nouri’s father told the Dutch broadcaster NOS that when Abdelhak – who can’t talk but can communicate by lifting an eyebrow or smiling – hears Donny’s voice, he responds by looking up, his eyes becoming bigger. “He knows what’s been said. He was happy for Donny.” - Guardian