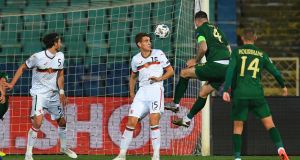 With the greater emphasis on passing and possession evident throughout, Ireland may have offered their supporters some glimpses of a brighter future in Sofia, but for the present all the signs here were that Stephen Kenny’s revolution is very much a work in progress.

Shane Duffy saved the team and its new manager from a defeat in this opening game of the new Nations League campaign with that traditional of Ireland goals, a far-post header from a set-piece. But the visitors came within a couple of injury-time minutes of defeat against hosts they might reasonably have expected to beat.

Ireland, despite looking generally rusty, dominated in terms of possession (by 61 to 39 per cent) and passing (613 to 341) with a 90 per cent completion rate, but some of the misplaced ones proved costly and it was, on the whole, a frustrating performance with not all of Kenny’s key selections paying off and the hosts managing more by way of actual shots on target.

“Overall it was disappointing,” said Duffy afterwards. “Their chances mainly came from our sloppy play and I have to take the blame for their goal, I didn’t get there quick enough. But we didn’t lose the game and that’s a positive for me. We had a lot of possession, it was something we had worked on a lot over the last few days and even after going the goal behind we didn’t just retreat into lumping or forward.”

Kenny seemed more relieved. “It’s a game that we would have liked to have won, that’s for sure,” said the manager afterwards. “We had good passages of play and had some good chances, but they also caught us the break a few times too so there are areas that we will need to improve on.

“But we had a lot of the play and kept doing the right things. We never would have deserved to lose that game. We could have won it if we had taken our chances but it might be a point gained because of how late the goal came.”

The Dubliner had made it clear after changing the backroom team and then naming his squad that he was intent on doing things his own way, and his determination to trust his own instincts was evident in the selection of his starting line-up.

Matt Doherty for Séamus Coleman was absolutely the right thing to do based on club form, but some of the other big calls were braver. James McClean and Shane Long have all too often not been good enough for Ireland, but the easier option would have been to stick with them. Instead, Kenny backed Aaron Connolly and Adam Idah to be better and the pair’s inclusion, along with Callum O’Dowda on the right side of a front three, characterised the manager’s intent.

Idah struggled, as it turned out, though, the 19-year-old getting pushed around a little too easily by more experienced defenders under crosses and caught out more than once by the pace of things when looking to work with the ball at his feet.

His best moments were when Ireland had bodies around him and he managed touches that teed others up to drive towards goal, but, against a side that sometimes didn’t clear the ball with conviction, Georgi Georgiev really should have been worked a little more by the front three.

Connolly, who had discovered for himself how tough things can be at this level in Switzerland last year, coped better with the challenge but fluffed his big moment early on when a blunder by Kristian Dimitrov allowed him in on goal. But the Brighton striker missed the target from a tight angle as O’Dowda and Idah both clamoured for him to square the ball instead.

In terms of the team’s aesthetics, there were clearly positives. Bulgaria did not look great but had certainly seemed to have more about them here on the counter than they had had in Dublin late last year. Still, Ireland dominated for stretches, retaining the ball more effectively than we have become used to in recent campaigns, and doing especially well out wide where they were allowed a lot of space to push into.

The early evidence of James McCarthy’s ability to serve as the player that will drive Kenny’s Ireland forward with his passing was far from convincing, though. The 29-year-old, whose defensive display was not great either, saw his first opportunity to open up the opposition fall flat when a poor attempt to send Connolly on his way was easily intercepted. Towards the end of the first half, as Ireland started to come under some pressure, he was one of the guilty parties as passes out of defence were misplaced.

Conor Hourihane was another, and it was his mistake that surrendered possession ahead of the Bulgarian goal. The Corkman sought to play the ball out to the right, but the pass was far too easy to read then cut out, and there was not a meaningful attempt at a tackle between that and John Egan’s last-gasp attempt to block Bozhidar Kraev’s shot after the striker had stolen away from Duffy.

Within a couple of minutes, Ireland might well have been level, with Connolly whipping a cross in that seemed to invite a tap-in, but all of the Irish players were a yard or two off where they needed to be in order to turn the ball home.

There would not be another chance like it from play despite the manager’s attempt to overhaul the attacking side of things by bringing on Robbie Brady then Callum Robinson then Shane Long in quick succession. The Sheffield United striker would manage a couple of long-range shots but, in truth, none of the three seemed set to make any great impact until Brady’s role in the goal.

With time running out, the hosts were making the most of their advantage, moving the ball about well against a side that no longer had the legs to maintain their early press, and still creating the odd good chance, as when Bircent Karagaren was sent racing into the space between Egan and Stevens but dragged his low shot across the face of Darren Randolph’s goal.

Ultimately, though, Brady’s energy and initiative won Ireland a 93rd-minute corner when he first blocked down a clearance then forced Strahil Popov to cut out his cross. The script for what followed was as old as the hills but, as he watched from the sidelines, Kenny was clearly not complaining.