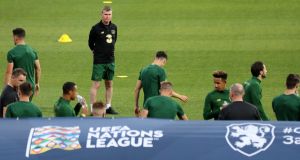 Republic of Ireland manager Stephen Kenny looks on during a training session at the Vasil Levski National Stadium in Sofia on Wednesday. Photograph: Kostadin Andonov/Inpho

Hristo Stoichkov’s generation and the great days of Bulgarian football still cast a long shadow over the country’s national team. The pressure to qualify for big tournaments persists even at a time when the players are nowhere near what they were 26 years ago when the country reached the semi-finals of a World Cup.

Asked why he would even want to put himself in the firing line by taking the manager’s job last year, current boss Georgi Dermendzhiev readily acknowledged that he might end up on the receiving end of criticism but quietly observed that: “those who are afraid of bears should not go into in the forest”.

Stephen Kenny’s own night-time walk in the woods commences this evening in Sofia where the wilder end of expectations are that Ireland will be reinvented as the Barcelona side everyone admired from a few years ago, all pressing and passing and playing opponents off the pitch.

As Brian Kerr observed this week on Newstalk, that sort of stuff is easier to aim for than to execute because on actual match nights you come up against managers and teams who might well have precisely the same game plan as you. Things get really tricky when they have better players too.

That, at least, should not be the case in Sofia where Kenny may indeed get to take a couple of tentative steps towards transforming the Ireland team he has inherited and improving its performances.

He has a well-earned reputation for making teams better although it is arguable that he has done best when expectations were at their most exceedable. At Shamrock Rovers and Dunfermline he ran into trouble and ended up experiencing pushback from players who seemed to feel they were better than him.

He bounced back from the experiences, though, and enjoyed by far his greatest success in recent years at Dundalk, but there will still be sceptics. Kenny’s achievements within the League of Ireland are well respected within a press pack that covers both it and the national team. When he was appointed, though, a market research company conducted a survey in which members of the general public were asked if he was the right man for the job and fewer than 20 per cent responded positively.

Those who have not had reason to follow his work at club level may still have to be convinced.

Kenny’s first concern, though, will be the players. “You want to let the players know that you are serious,” says Kerr of presenting yourself to the senior international squad after landing the job of being their manager. “That you are prepared. That you know the game.

“You are not trying to over-impress them with your knowledge but you do want them to feel that: ‘this fella knows what he is talking about’.”

The 48 year-old Dubliner is serious, he will be prepared and he certainly knows the game. That much the players will almost certainly realise by now and it seems virtually certain that he will give each and every one of his starters this evening a detailed sense of what their role is supposed to be; something various players have suggested was lacking in the last two regimes, most notoriously Martin O’Neill’s.

If things start brightly, it will give the manager, as well as the team, momentum to take into the one against Finland on Sunday. If not, then it will be an early test of how he handles himself in that situation. What he does to try to retrieve it during the game and what he says afterwards.

The feeling is that in an era when managers with talent are finding different routes to high-level jobs, his lack of substantial club experience outside of the League of Ireland will not be held against him initially. A handful of the players have some grounding with senior clubs here and the most prominent members of his coaching staff, Keith Andrews and Damien Duff, have certainly earned their stripes in the English game.

That, though, is not to say that it won’t be a stick to reach for if things go wrong.

Over time, though, as a generation of players whose development he has had a hand in come through; even that possibility should recede. He showed a great deal of self belief in the way he handled his time with the under-21s and it seemed to find expression in the way that the team played. Certainly the effect he had during his short time there was dramatic.

Kerr believes his own stints with the Ireland youths and colleges sides helped to prepare him for the rhythms of international windows and so the year and a half should stand to Kenny too.

His greatest challenge might ultimately to live up to expectations he has himself done a great deal to generate, as he acknowledged himself on Wednesday when he suggested he might answer some questions regarding his aspirations “too honestly”.

If the senior team’s style of play does not become noticeably easier on the eye, if the players do not suddenly start to express themselves or, worse, they do but quickly have to be reined in again then there may well be a bit backlash.

As Kerr also noted this week, Kenny is more of a pragmatist than he somehow likes to let on. He has, in any case, waited a very long time to mix it at this level and now that he is here, seems impressively unconcerned about what might lurking around the next bend.