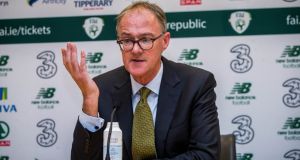 FAI chairman Roy Barrett has dismissed as “nonsense” a suggestion that there was a conflict of interest about his appointment in January.

Recent reports indicated that Barrett was recommended to the vacancy by the governor of Bank of Ireland – the debt-ridden association’s largest creditor.

The bank remains the FAI’s main lender within the €52 million of liabilities they are burdened by.

While interim chief executive Gary Owens later admitted this presented a conflict of interest, Barrett was steadfast in his position.

He went to say that he didn’t declare the matter to Uefa or sports minister Shane Ross back in January before he joined the FAI.

“There seems to a conspiracy theory around it but it’s nonsense to suggest conflict of interest,” he claimed

“It’s completely transparent and quite a normal way of business. I had no conversations with Patrick on the write down, only on the day I was approached by the headhunter in December and last week when this issue was raised in the newspapers.

“I am quite surprised we’ve been talking about this. In the nature of the approach to me that was from Amrop they are the only people we are talking about.

“This is not opaque; it is completely transparent.

“It is misleading if people believe that my getting approached by Amrop on the recommendation of a number of people in any way impacted me in my role to try and secure the best funding package for the Association. All I can say, once again, is that my conscience is very clear on the whole thing.”

Owens, who was a colleague of his deputy CEO Niall Quinn and Barrett, in the self-style Visionary Group, admitted the timing of the issue was unfortunate.

“If we thought about it, yes, it should have been declared,” he told Newstalk.

“We never saw it as a conflict of interest until it came up recently.”

Members logging into the videocall overwhelmingly backed the reform measures required to release over €30 million of State funding.

In April 2019, after the FAI entered unprecedented turmoil over corporate governance and financial issues, the government suspended funding.

That meant the second instalment of the annual €2.9 million from last year was immediately frozen.

As part of the bailout deal signed by Barrett in January, the State grants and interest-free loans were conditional on structural changes being ratified by members.

Included in the updated conditions were the addition of two independent directors to split the 12-person board equally with those elected through football channels as well as a cull of 30 senior council members with 10 years of service.

In a compromise reached over the weekend, those veterans can stay onboard until July 2022.

“Perhaps the extent of the voting margin will make this a non-issue,” added Barrett on his own situation.

“Hopefully, the Government funding will start being released from next week.”

1 Munster beat Glasgow to keep their winning streak going
2 The Offload: Ireland are stuck in no man’s land
3 New Killarney athletic track another jewel in the Kingdom’s crown
4 Every kind of wind imaginable was against Tipperary football - and they came through
5 Ken Early: Roles have reversed for Guardiola and Mourinho
Real news has value SUBSCRIBE
Crossword Get access to over 6,000 interactive crosswords