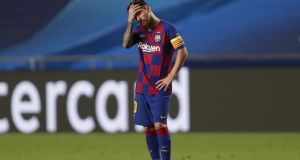 Lionel Messi after the 8-2 Champions League loss to Bayern Munch. ‘I would never go to court against Barca because it is the club that I love.’ Photograph: Manu Fernandez/Pool via Getty Images

Lionel Messi has confirmed he will remain at Barcelona for another season having previously stated his intention to leave the club on a free transfer.

In an interview with Goal.com on Friday, the Argentina forward said: “I wasn’t happy and I wanted to leave. I have not been allowed this in any way and I will stay at the club so as not to get into a legal dispute. The management of the club led by Bartomeu is a disaster.”

Messi, whose camp believed that a clause in his contract meant he could walk away for no fee, added: “There was another way (out) and it was to go to trial. I would never go to court against Barca because it is the club that I love. Barça gave me everything and I gave it everything. I know that it never crossed my mind to take Barça to court.”

The 33-year-old revealed that he had informed president Josep Maria Bartomeu of his intention to leave “all year” and his mind was already made up before their 8-2 thrashing by Bayern Munich in the Champions League.

La Liga against Leo Messi and his father - side with Barcelona: “The €700m clause is absolutely valid”. 🚨 #FCB #Barcelona #Messi pic.twitter.com/8ZbaoZtR3B

“He believed it was time to step aside,” Messi said. “I believed that the club needed more young people, new people and I thought my time in Barcelona was over, feeling very sorry because I always said that I wanted to finish my career here. It was a very difficult year, I suffered a lot in training, in games and in the dressing room.

“Everything became very difficult for me and there came a time when I considered looking for new goals, new air. It did not come because of the Champions League result against Bayern, the decision had been thinking about it for a long time. I told the president and well, the president always said that at the end of the season I could decide if I wanted to go or if I wanted to stay and in the end he did not end up keeping his word ”. I suffered a lot this year and I thought about taking a step to the side.”

Messi also admitted that his family had started crying when he informed them of his decision to leave but only the prospect of a court battle with Barcelona had changd his mind.

“When I communicated this to my wife and children, it was a barbaric drama,” he said. “The whole family crying, my children did not want to leave Barcelona, nor did they want to change schools. Now I am going to continue in the club because the president told me that the only way to leave was to pay the €700 million clause, that this is impossible.”

Earlier, Messi’s father and representative Jorge had revealed the contents of a letter he had written to the Spanish league arguing that Messi is not obliged to pay his €700m buyout clause in order to unilaterally depart Barcelona this summer. The league immediately replied by reiterating their position, describing Messi Sr’s claims of lacking context and going against the wording of the contract.  - Guardian