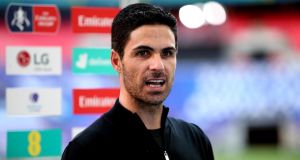 Mikel Arteta believes Arsenal are closing the gap on the Premier League’s leading sides but must improve internally and via the transfer market to sustain progress over an entire season.

Arsenal secured the second trophy of Arteta’s short managerial career on Saturday with a penalty shootout victory against Liverpool in the Community Shield. Since mid-July Arsenal, who finished eighth in the Premier League last season and 10 points adrift of Champions League qualification, have beaten the champions in the league plus both Manchester City and Chelsea in the FA Cup as the new manager’s reign gathers momentum.

The next and greater challenge, according to Arteta, will be to maintain that level over the course of a Premier League campaign, and he insists the squad must improve to deliver consistently. “I believe we are closing the gap but one thing is to do it in a short period of time, and another is to be able to sustain it for 10 months,” the Arsenal manager said.

“We know this league, how competitive and challenging it is. We are in the right direction. We are trying to assess in the market to improve our balance in certain positions and improve the quality as well. But my biggest fight at this club is to convince these players we can fight with these clubs in the long term, and that they are better than what they showed last year. Let’s try to do that. That’s my job.

“Two days ago we started to have players back in training and I didn’t hear one excuse like: ‘Oh Liverpool had two weeks [training] in Austria, better preparation . . . ’ None of that. When I was in the dressing room I had the feeling they believed we could win. They didn’t feel any fear. They had a lot of respect for Liverpool but they wanted to really go for it. And from the first minute they showed quality and courage on the pitch.”

Arsenal’s defensive improvement under Arteta was again evident at Wembley where Liverpool had only Takumi Minamino’s first goal for the club to show for a dominant second-half display. They have conceded two goals in their last two matches against Jürgen Klopp’s team, who scored eight in their two meetings with Unai Emery’s Arsenal last season.

Arteta said: “We know that if you want to fight for trophies you can’t concede the amount of goals we have over the last few seasons. But obviously with the ball in the attacking phase we must do a lot better. We had some periods [against Liverpool] where we showed we are developing in the right direction. Defensively we are solid. Really, if we have the mindset that we have 11 players doing it, I think we have a really good chance.”

Klopp, meanwhile, confirmed Liverpool will vote in favour of keeping the five-substitutes rule at the next Premier League shareholders’ meeting on Thursday. A majority of Premier League clubs voted this month to return to three substitutes for the 2020-21 campaign but the decision is being reconsidered. Klopp accepts he will be accused of self-interest in pushing for five substitutes to stay, but claims it is necessary to protect players in what will be a punishing schedule.

“I know the discussion will go that it’s an advantage for the bigger clubs,” Klopp said. “I don’t discuss it from that point of view. I don’t want to have an advantage in the competition. We have 38 Premier League games in a four weeks’ shorter season. And all the other competitions will be much the same as far as I know. That means these things would help. But I can imagine that other teams see it differently.

“It’s never for having an advantage. I saw it last season as well when we played the last nine games and City could bring on five players – not bad! But it’s all about how can we get through this season, not: ‘Oh that’s a little advantage here.’ Getting in a good way through the season for the sake of the players and performance levels, I think it would make sense.”