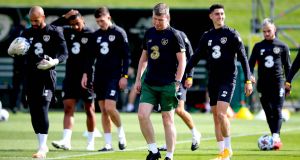 Enda Stevens has warned the Republic of Ireland’s opponents not to underestimate new manager Stephen Kenny because of his career path.

Mick McCarthy’s successor has spent much of his managerial career, apart from a brief spell in Scotland with Dunfermline, working in the League of Ireland and does not boast the same profile as the likes of the former Ireland skipper and predecessors Martin O’Neill and Giovanni Trapattoni.

However, Sheffield United defender Stevens, who played at home for UCD, St Patrick’s Athletic and Shamrock Rovers before moving to England with Aston Villa, does not believe that is an impediment as he attempts to establish himself on the international stage.

“Your past is your past. He is as hungry and determined to do as well as I am and every player here. He’s just a manager who wears his heart on his sleeve.

“You can see the passion that he has and the dedication he gets into how he wants us to play and how he wants you to really do well.”

Kenny has been pitched straight in at the deep end with his first two games — Nations League fixtures against Bulgaria and Finland this week — his only preparation for October’s rescheduled Euro 2020 play-off in Slovakia.

Stevens said: “The Nations League, they are competitive friendlies now to get into a play-off final, and then after these two games, it’s a good build-up to the play-off that is going to come next month.

Ireland’s first Nations League campaign did not go well as O’Neill’s men Lost home and away to Wales and drew twice with Denmark, and they are determined to improve upon that as they prepare to lock horns with the Bulgarians, the Finns and the Welsh once again.

However, the main focus remains securing their passage to the delayed Euro 2020 finals and what lies beyond.

Stevens said: “You want to play in a major tournament for your country.

“It would be the pinnacle of your career representing your country. It’s a quick turnaround with the Euros being delayed and then we’ve got the World Cup qualifiers and a World Cup around the corner.”

Stevens is likely to line up alongside club-mate John Egan for Ireland once again with the former Sunderland, Gillingham and Brentford man having established himself as a Premier League player following the Blades’ hugely impressive first season back in the top flight.

“He demands the best from his team-mates and has the respect of all the lads. He has grown each year, got better and better.