Manchester United and England footballer Harry Maguire says that he feared for his life and thought he was being kidnapped as he was arrested by plainclothes police officers following a fracas on the Greek island of Mykonos. Video: Reuters 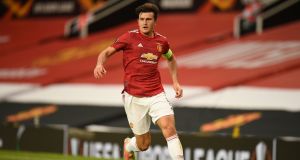 Manchester United captain Harry Maguire has given his first interview since being charged in Greece. Photograph: Oli Scarff/Getty/AFP

A visibly shaken Harry Maguire has claimed he was “scared for his life” and believed he was being kidnapped during the incident outside a bar in Mykonos that led to the Manchester United captain being found guilty for assaulting a police officer, swearing, resisting arrest and attempted bribery last week.

Despite denying all charges Maguire was given a suspended sentence of 21 months and 10 days by a court on the neighbouring island of Syros. The 27-year-old immediately launched an appeal and, close to tears, on Thursday night spoke publicly for the first time about the episode on BBC News at Ten.

“I don’t feel I owe an apology to anybody. An apology is something when you have done something wrong,” Maguire said. “I regret putting the fans and club through this but I did nothing wrong.

“It was horrible, not something I would want to do again. I don’t wish it on anybody. It’s the first time I’ve been inside a prison.”

The reference to an apology came after the prosecution lawyer, Ioannis Paradissis, stated on Wednesday that if Maguire said sorry this could “pave the way for “a different sentiment” to prevail when his appeal is heard. Maguire’s defence had claimed during Saturday’s hearing that his younger sister, Daisy, had been injected with a substance.

He reiterated this claim: “These two men approached my little sister, asked her where she was from, she responded and then my fiancee, Fern, saw my little sister’s eyes going into the back of her head. She was fainting and was in and out of consciousness and …” Maguire said, before breaking down. “Sorry.”

Maguire tried to get his sister to a hospital but instead he and his party were taken to a police station.

“My initial thought was that we were being kidnapped,” he said. “We got down on our knees and put our hands in the air and they just started hitting us.

“They were hitting my legs saying my career is over. Saying: ‘No more football. You won’t play again’.

“At this point I thought there was no chance these are police so I tried to run away. I was in that much of a panic, fear. Scared for my life. All the way through it.”

Maguire was asked if he did try to bribe the police. “No, for sure,” he said. “As soon as I saw that statement – [I thought]: ‘It’s just ridiculous’.”

United are supporting the defender and he remains the captain. “It’s a massive privilege to play for Manchester United and be captain but obviously it’s not my decision to make,” Maguire said.

“I have great faith in Greek law that the retrial will give us more time to prepare, gather the evidence and allow witnesses into the court. I’m really confident the truth will be told and come out.”

Maguire had been out with family and friends. They included his brother Joe, one of his two co-defendants, who were each sentenced to 13 months – again suspended. His appeal may take between one to two years to be heard. - Guardian

Swimming in the planet’s deepest, darkest waters is where Nuala Moore feels most alive 07:00
Great Escapes: When Daniel Day-Lewis became king of the ring 07:00
Ruben Neves earns Wolves a draw at Newcastle 22:37
Remote congress a hard slog as split season and sin bin make it through 20:19
Ireland’s defence points the way forward in Rome 19:45

2 Swimming in the planet’s deepest, darkest waters is where Nuala Moore feels most alive