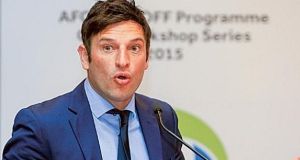 Noel Mooney: ‘I had no involvement in the Jonathan Hall report.’

Newly appointed general manager for football services and partnerships at the FAI Noel Mooney has denied any involvement in commissioning the Jonathan Hall report. This is the hastily constructed document intended to provide a justification for the association’s board to move John Delaney from his then chief executive post into the specially created role of executive vice-president.

There have been suggestions that Mooney had links to Hall and had a hand in organising the report on behalf of the FAI. Rumours also circulated that he was being lined up to replace Delaney as far back as March when the board claimed it had independently recommended the creation of the new position and Delaney’s switch to it.

The Limerick man also denied that he had discussed the possibility of taking over the chief executive’s job with the FAI at that time and claimed that any talk of it within Uefa was not official but rather a routine case of colleagues casually linking senior staffers at the organisation with prominent posts back in their national associations. His appointment on Sunday evening is understood to have been coolly received in Government and Sport Ireland circles.

Speaking to the association’s communications director Cathal Dervan in an interview posted on the FAI’s YouTube channel on Monday he insisted that neither he nor Uefa wished to impede the process of reform at the organisation and repeatedly referenced the board’s responsibility for overseeing things on that front. Mooney declined to speak to The Irish Times or other members of the media at the European Under-17 Championship final on Sunday in Tallaght.

Asked about the suggestion that he may have been in talks about filling the high-profile vacancy that that report had in effect helped to create, he replied: “I’ve never discussed the role of CEO with the FAI.”

Neither Delaney nor Mooney’s apparently close relationship with the former chief executive was mentioned once in the 17 minute interview. But the former FAI marketing manager, who played for the same Tipperary club as his former boss, St Michael’s, back in the early 1990s, was asked about comments made at the association’s 2017 agm where he appeared to warmly endorse the work of the entire board.

He now suggests that this was no more than the sort of routine flattery that Uefa officials would normally utter on such occasions and that what he had actually been impressed by was the community-level work being done by the association.

“Part of my role at Uefa is to visit the annual congress of different football federations,” he said, “to make a speech on behalf of Uefa, on behalf of our president and generally we will be complimentary about the federation when we do speak to them. However, the FAI has many faces; in many areas it does tremendous work across a different array of areas . . . including community development for example.”

As for the current crisis, he continued: “The reviews and the investigations that are going on are very much the responsibility of the board here and the sub group. In the administration here we don’t have any role in reviews or investigations or anything like that [but they] offer us the opportunity for change, to evolve as an organisation and to be better in the future, a lot better in the future.”