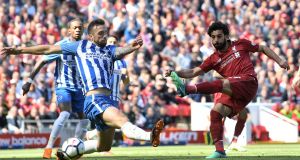 Liverpool may have left it typically late to seal Champions League qualification but their farewell to the Premier League season and warm-up for Real Madrid was otherwise faultless. Mohamed Salah began a comprehensive win over Brighton with a record 32nd league goal of the campaign and Kop favourite Andy Robertson capped it with his first for the club. Anfield could only admire the exhibition in between.

Jürgen Klopp had called for one last push to clinch a place among the European elite for the second successive season. His team delivered when it mattered, as they have throughout a campaign that has restored Liverpool’s status as a Champions League side to be feared, although in truth this was a sunny Sunday-afternoon stroll against a team that, with safety assured, have had their own campaign to cherish. Liverpool’s thoughts now turn to Kiev. Their supporters are already dealing with that reality and the £1,000 costs of flights to Ukraine. “Thomas Cook Sport Touts” read one banner on the Kop before kick-off, a reference to the exorbitant prices being charged by Liverpool’s official travel partner.

On the pitch Brighton tried to deliver a contest but their neat passing game was confined to their own penalty area. They had nowhere else to go. Liverpool laid siege to Matthew Ryan’s goal from the start with Klopp placing Dominic Solanke on top of his imperious front three and seeing his team take complete control. Poor finishing, overelaboration and Kevin Friend’s aversion to giving penalties were his only concerns before Salah and Dejan Lovren effectively sealed Champions League qualification before half-time.

There was none of the tension of last season’s must-win finale against Middlesbrough nor the fatigue that had slowed Liverpool’s approach to the finishing line this season. A week’s preparation for Brighton re-energised Klopp’s players. The fortnight-long break before the Champions League final will be embraced by the Liverpool manager for the same reason.

The hosts could have been ahead inside eight minutes when Shane Duffy sliced a backpass to Solanke only for Ryan to gather at the young striker’s feet at the second attempt. Duffy, the former Everton defender, then survived two penalty claims that left Anfield seething with the officials. Friend was unmoved when Duffy stooped for a headed clearance and the ball inadvertently struck his arm. There was little justification for denying the second claim, however, when the Republic of Ireland international sent Salah tumbling inside the area with an awkward challenge that made contact with the ball after the man. Friend again waved play on, leaving the fourth official, Mike Jones, to cop an earful from Klopp.

When Sadio Mané then shot straight at Ryan having been played clean through by Solanke it could have been cue for apprehension in the home fans. But they appear immune to that these days. There is a belief in their team’s potency that the unerring accuracy of Salah has helped cement, and the first time he found space inside a crowded Brighton area another record fell at the feet of the Egypt international.

Salah moved ahead of Alan Shearer, Cristiano Ronaldo and Luis Suárez as the record goalscorer in a 38-game Premier League season after Trent Alexander-Arnold had driven through the Brighton midfield and found Solanke on the edge of the area. Solanke turned the ball on to Salah who needed one touch to create space for a low left-foot finish beyond the Brighton keeper. It was his 44th goal in total this season. A hat-trick against Real Madrid on 26 May will be required to equal Ian Rush’s all-time Liverpool record.

Lovren delivered the comfort of a two-goal lead with a towering header from Robertson’s inviting cross after Brighton cleared a corner but left the centre-half unmarked for the return ball. The cushion should have arrived earlier but Mané, having found himself through on goal once more, attempted to gift-wrap a second for Salah and enabled Ryan to intercept before Duffy blocked his second attempt on the goal-line. Klopp went apoplectic in his technical area at Liverpool’s indulgence. But it never seemed likely to cost them.

Georginio Wijnaldum and Roberto Firmino wasted excellent chances before the break – several in the Brazilian’s case – but the scoreline offered a more accurate reflection of Liverpool’s dominance when Solanke struck his first league goal for the club. It was an excellent finish too, created by Salah, who took Firmino’s pass and evaded two challenges before releasing Solanke inside the area. The Chelsea academy graduate gave Ryan no chance with a powerful drive that flew in via the underside of the bar.

To cap a perfect afternoon for Klopp’s team the final goal of the home season fell to the popular Robertson, perfectly placed to open his Liverpool account after the substitute Danny Ings’ cross deflected the ball into his path with five minutes remaining.